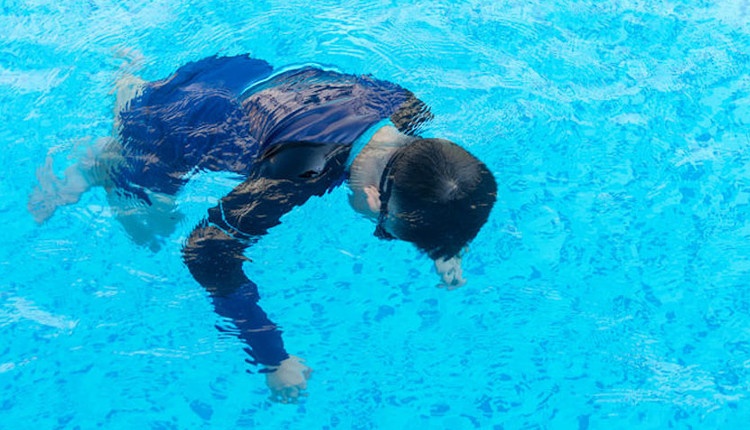 The liquid is introduced into the lungs through the upper airway, which occurs, for example, when the subject loses consciousness completely and falls below the level of the liquid, or when he/she is conscious but is pushed below the level of the liquid by an external force (e.g. a wave or the arms of an assailant) and runs out of air in the lungs with exhalation BEFORE returning to the surface.

Drowning – potentially fatal within minutes – is not always fatal, however: in some cases it can be successfully treated with appropriate resuscitation manoeuvres.

Death by drowning was historically used as a capital punishment for certain crimes, e.g. the crime of treason in the Middle Ages.

IMPORTANT: If a loved one has been the victim of drowning and you have no idea what to do, first contact emergency services immediately by calling Emergency Number.

The severity of drowning is divided into 4 degrees:

1st degree: the victim has not inhaled liquids, is ventilating well, has good cerebral oxygenation, has no disturbance of consciousness, reports well-being;

2nd degree: the victim has inhaled liquids to a slight degree, crackling rales and/or bronchospasm are detectable, but ventilation is adequate, consciousness is intact, the patient displays anxiety;

4th degree: the victim inhaled so much liquid or remained in a hypoxic state until cardiac arrest and death.

Secondary drowning refers to the appearance of complications in the respiratory tract and lungs after a drowning event, even several days after the event, caused by the accumulation of water deposited in the lungs.

Dry drowning’ refers to the occurrence of complications in the respiratory tract and lungs after a drowning event, even several days after the event, caused by laryngospasm.

The body and brain mistakenly ‘sense’ that water is about to enter through the airways, so they cause the larynx to spasm in order to close it and prevent the hypothetical entry of liquid, which also causes air not to enter the body, sometimes leading to death by drowning without being immersed in water.

The cause of death in drowning is hypoxaemia, which leads to acute hypoxia resulting in impaired function especially in the brain and myocardium with loss of consciousness, right heart failure and cardiac arrest.

Hypoxemia is in turn caused by the entry of water into the lungs and/or laryngospasm (closure of the epiglottis, which prevents water and air from entering).

In Italy, there are approximately 1000 serious cases of water accidents each year, with a mortality rate approaching 50%.

According to the World Health Organisation, about 5,000 children between the ages of 1 and 4 die in Europe every year, and worldwide, there are about 175,000 deaths due to drowning in the first 17 years of life.

Death by drowning should be distinguished from sudden death by immersion, which is caused by trauma, reflex cardiac syncope, choking on বমি and thermal imbalance

Death by drowning: signs and symptoms

Death by drowning is preceded by four stages:

1) Surprise stage: lasts a few seconds and is characterised by a rapid and as deep as possible inhalation before the individual goes underwater.

2) Resistance stage: lasts for about 2 minutes and is characterised by initial apnoea, during which the individual prevents fluid from entering the lungs by exhaling and becomes agitated while trying to resurface, typically by stretching their hands above their head in the direction of the water surface.

During this phase, the following occur progressively:

When the subject runs out of air in the lungs by breathing, water penetrates along the airways causing apnoea caused by closure of the epiglottis (laryngospasm), a reaction designed to protect the respiratory system from water but which also prevents the passage of air.

Hypoxia and hypercapnia subsequently stimulate the nerve centres to restart breathing: this causes the glottis to open abruptly, which results in considerable amounts of water entering the lungs, impeding gas exchange, altering surfactant, alveolar collapse and the development of atelectasis and shunts.

3) Apnoic or ‘apparent death’ stage: lasts about 2 minutes, in which attempts to resurface, in vain, are reduced until the subject remains immobile.

This stage is progressively characterised by:

4) Terminal or ‘gasping’ stage: lasts about 1 minute and is characterised by:

The anoxia, acidosis and electrolyte and haemodynamic imbalances resulting from asphyxia lead to rhythm disturbances up to cardiac arrest and death.

How quickly does one die?

The time in which death occurs is extremely variable by virtue of various factors such as age, state of health, state of fitness and mode of asphyxia.

An elderly person, suffering from diabetes, hypertension and pulmonary emphysema, in the event of drowning and relative suffocation, can lose consciousness and die in less than a minute, as can a child suffering from bronchial asthma.

An adult, fit individual accustomed to prolonged exertion (think of a professional athlete or scuba diver) in the event of suffocation may, on the other hand, take several minutes to lose consciousness and die (even more than 6 minutes), but in the majority of cases death occurs in a variable time ranging from about 3 to 6 minutes in total, in which the 4 phases described in the previous paragraph alternate.

Typically, the subject remains conscious in apnoea for about 2 minutes, then loses consciousness and remains unconscious for another 3 to 4 minutes before dying.

There are mainly three types of water in which drowning occurs: fresh, salt or chlorinated.

Each type of water causes a different reaction in the body.

Salt water is typical of marine environments and has 4 times the osmotic pressure of plasma; this hypertonicity is linked to the presence of mineral salts such as sodium, chlorine, potassium and magnesium.

In order to restore normal homeostasis, a movement of water from the capillary to the pulmonary alveolus is thus created, leading to haemoconcentration, hypernatriemia and hyperchloremia.

In this way, there is a decrease in circulating blood volume and, in the lungs, the alveoli are flooded with fluid causing diffuse pulmonary oedema.

Freshwater is typical of river and lake environments and has an osmotic pressure half that of blood.

Due to this hypotonicity, it is able to cross the alveolus-capillary barrier and thus pass into the pulmonary venous circulation causing hypervolaemia, haemodilution and hyponatriemia.

This can lead to a doubling of the circulating volume.

This leads to a reduction in osmotic blood pressure, resulting in erythrocyte haemolysis and hyperkalemia.

Both of these effects are potentially serious for the body: while increased circulating potassium can lead to malignant cardiac arrhythmias (ventricular fibrillation), haemoglobinuria resulting from haemolysis can lead to acute renal failure.

This process rapidly leads to an overflow of fluid into the lungs, resulting in the onset of pulmonary oedema with reduced lung compliance, increased intrapulmonary shunt and altered ventilation/perfusion ratio.

From a microbiological point of view, this type of inhalation is also the most dangerous, due to the high possibility of ingesting viruses, bacteria and other pathogens;

Chlorinated water is typical of swimming pools and is very dangerous due to the effects of the strong bases (chlorates) used to clean the water and environments.

Inhaling them, in fact, causes severe chemical irritation of the lung alveoli with a consequent blockage in the production of the surfactant needed to keep the lungs ventilated.

This leads to a drastic reduction in lung exchange areas, resulting in lung collapse and atelectasis.

From a prognostic point of view, this type of inhalation is the worst, leading to death in a higher number of cases.

A common feature of all three types of water (although less frequent in swimming pools) is that drowning often involves being in water at a low temperature, thus favouring the development of hypothermia, which is favoured in children, especially if they are very thin due to reduced subcutaneous fat.

When the core temperature reaches values below 30 °C, life-threatening pathophysiological manifestations occur: the heart rate, blood pressure and metabolic activity of the body progressively decrease with the onset of asystole or ventricular fibrillation;

Drowning: what to do?

প্রাথমিক চিকিৎসা is influenced by various factors and, in the most serious cases, certainly represents a real crossroads between survival and death of the drowned person.

Emergency Number must be called as soon as possible, alerting the operator to the seriousness of the situation.

Medical treatment of the drowned person aims to:

The following are important for this purpose

To manage early complications, the following are important

Possible late complications in drowning are: