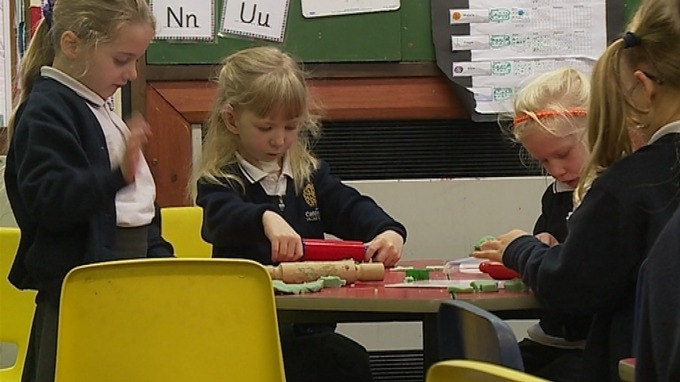 Another day at Caddington Village School in Bedfordshire and another small step forward for five-year-old Ava Mear.

In January she almost died after having four heart attacks in one night. It was caused by a severe reaction to a bacterial infection.
After six months in hospital, she’s back at school part time, and loving every minute, with the support of her friends.

“It’s amazing. Coming back into school, reforming her friendships in year one and it’s just really lovely to see.
They really look after her and she’s happy just to do everything by herself, but yes they do look after her.”
– ROWENA BALDWIN, TEACHER

Ava’s progress is remarkable.
When we filmed with the family in April, it was early in her recovery. Still very fragile, she was sleeping in hospital every night.

The infection got into her brain, meaning she also had to re-learn how to walk and talk.
At Great Ormond Street Hospital she was attached to an artificial lung, called an ECMO machine.
Her parents have raised £56,000 for a portable version that ambulance crews can take out on the road.
It was their way to say thank you to the teams that saved her life.

“Within 24 hours we nearly lost our little girl, so for her to have come back to school, she’s done amazingly well.
The old Ava is coming back again, the cheekiness and the giggling and even with her speech she’s talking so much better as well.
She’s come on brilliantly.”
– MARY-JANE MEAR, AVA’S MUM

For the whole family, it’s a pleasure to get back to normal life.
A life, which thanks to the miracles of medicine, includes a remarkable five-year-old girl.