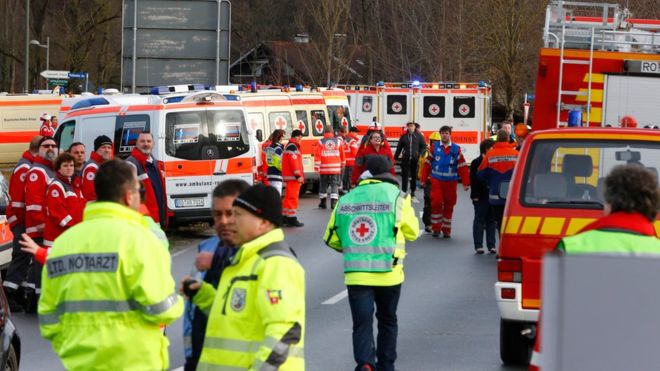 Two passenger trains have collided in the German state of Bavaria, with police saying at least four people have been killed and scores injured

The head-on crash happened near Bad Aibling, a spa town about 60km (37 miles) south-east of Munich. One of the trains was derailed in the crash and several carriages were overturned, German media reported. Police said rescue teams were trying to free people still trapped in the wreckage.

Regional police said in a tweet (in German) that four people were dead and about 100 injured, of whom 15 were in a critical condition and 40 seriously hurt.

“This is the biggest accident we have had in years in this region and we have many emergency doctors, ambulances and helicopters on the scene,” another police spokesman, Stefan Sonntag, told the Associated Press news agency.

He said the two regional trains had collided on a single track between Rosenheim and Holzkirchen shortly before 07:00 local time (06:00 GMT).