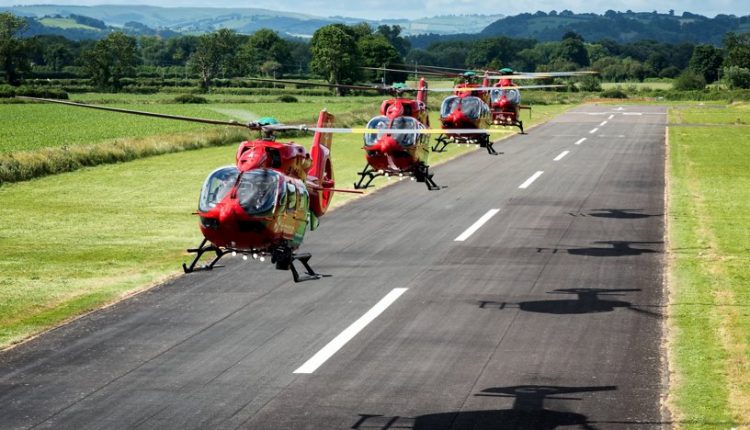 The Wales Air Ambulance operates three H145s for helicopter emergency medical services (HEMS), plus an H135 for Children’s WAA, to carry out pediatric transport, making them the largest H145 operator in the UK.

As only the third HEMS operator in the UK to use the twin-engine H145, the Wales Air Ambulance puts its “four dragons” to use providing primary care services for the Welsh people, an undertaking made possible with the H145’s medically configured interior, clamshell doors, and open cabin, among other attributes. While the Children’s Wales Air Ambulance operates with an H135 in order to carry out specific pediatric transport in an emergency scenario.

Operating out of bases in Caernarfon, Llanelli, Welshpool and Cardiff, they cover 8,000 sq miles (20,700 km2) of remote countryside, mountain ranges, cities, and coastline in aid of approximately 2,500 missions a year.

I’m happy with the H145. It gives us what we need as a team. It gives us that assurance that we can undertake our roles effectively and safely.

For its specific pediatric transport and neonatal division, WAA operates an H135, as its Children’s department. In 2017, the Children’s WAA helped 332 infants and children.

To keep this crucial public service running 365 days a year – thanks in part to a 99% availability rate – the WAA raises £6.5 million annually through online donations, fundraising and pound appeals. “I’m happy with the H145. It gives us what we need as a team,” says Jason Hughes, critical care practitioner and team leader for EMRTS WAA. “It gives us that assurance that we can undertake our roles effectively and safely.”

Here, members of the WAA discuss their new H145s and the role of Wales Air Ambulance in providing emergency assistance by air.