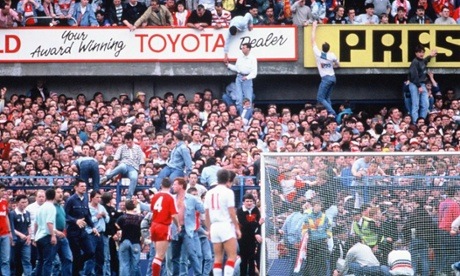 Some of the 96 people who died in the Hillsborough disaster in 1989 could have been saved if the ambulance service had organised a better response, a senior ambulance officer who was on duty within the football ground has said.

Paul Eason, then a station officer for the South Yorkshire Metropolitan Ambulance Service (SYMAS), agreed at the new inquests into the 96 deaths that the response to the disaster had not been successful and was not the service’s “finest hour.”

He agreed that some of the victims may have died while being carried up the Hillsborough pitch on makeshift stretchers by police and other supporters, because they were on their backs, not in the recovery position.

Eason, whose role inside the ground at the FA Cup semi-final between Liverpool and Nottingham Forest was to be the “eyes and ears” of the ambulance service, admitted to a series of personal failings. These included that he failed to recognise the lethal nature of the crush soon enough, failed to declare a major incident until 3.22pm which was too late, and did not communicate the seriousness of the crisis to ambulance control.

The court, in Warrington, heard that SYMAS control declined a police request to send a fleet of ambulances because they had Eason and another officer at the ground who were supposed to assess the degree of emergency.

Mark George QC, representing 22 families whose relatives died in the crush, put to Eason that the scene on the pitch as the disaster unfolded was “unmanageable chaos” and it was an “obscenity” that people emerging from the overcrowded Leppings Lane terrace pens were “literally falling over” injured and dead bodies of people who had been “dumped” there. As hundreds of South Yorkshire police officers were on duty, George suggested that Eason should have become involved in organising a protected area, on the pitch, in which people could have been treated, had airways cleared, given oxygen and been laid on their sides in the recovery position, according to priority.

Implementing this plan “would probably have saved the lives of some of those who died; do you not accept that?” George asked.

“I can’t disagree with that,” Eason replied.

In the absence of such a plan, George said that people who had difficulty breathing because they had been crushed were carried on the makeshift stretchers – advertising hoardings were used – 150 yards to the Hillsborough gymnasium, on their backs, “mostly because of a lack of knowledge” from those carrying them.

“There is a real chance that people probably died in that time,” George said. If people were unconscious, their tongues could have lolled back, obstructing their airways, he said, and those who were in danger were “beyond redemption” when they arrived at the gymnasium.

Eason’s role had been described by another SYMAS officer as the “eyes and ears” of the service within the ground but, George said: “The eyes were blurred and the ears were blocked, weren’t they?”

He accepted George’s assertions that he failed “properly to assess the situation” when the crush happened; failed to declare a major incident until 3.21pm or 3.22pm, which he should have done earlier; failed to liaise with the police during the course of the afternoon; and failed to “convey all relevant information” to ambulance control.

Each ambulance was equipped with bolt cutters, the court heard, but the lack of ambulances meant cutters were not used to cut the wire mesh fence in front of the pens. Eason said the cutters may not have worked on the wire, but, shown film of supporters and police trying to tear down the fences with their bare hands, he agreed with George that the sight was “pitiful.”

George referred to a SYMAS report after the disaster which described it as “a successful exercise” by the ambulance service.

“That is not only an insult to the dead and injured,” George said, “it is complete rubbish isn’t it, and you wouldn’t associate yourself with that, would you?”

He accepted it is “not often” that a major disaster happens “right in front” of one of the emergency services, and Hillsborough was “perhaps unique,” as it happened in front of two emergency services: the South Yorkshire police and SYMAS. In response to George’s suggestion that his response inside the stadium to the lethal crush was “a complete shambles,” Eason said: “We had a delayed response.”

“You had a delayed response,” George said. “It wasn’t SYMAS’s finest hour, was it?”

Questioned by Jenni Richards QC, representing Yorkshire Ambulance Service, the successor body to SYMAS, Eason said that in fact he did not believe he could have helped to establish a treatment area for injured people on the pitch. It would not have been safe given the “highly charged” emotions of supporters emerging from the crush, he said, and an ambulance officer could not have instructed a police officer, working for a “hierarchical” force, to change the order to take people to the gymnasium.

Even if he had tried to stop supporters carrying injured people on hoardings up the pitch, Eason said he would not have succeeded; they would have carried on, “for the best of motives”.

He said he was not able to judge whether earlier treatment would have saved anybody’s life, because he had not seen the medical reports relating to the 96 victims.

Richards took Eason through all his actions on the day, from initially not recognising the seriousness of the crush, which he said was due to nobody telling him, and being unable to see into the pens through a line of police officers and fans. He said he realised at 3.16pm that it was a major incident, ran to an ambulance to secure attention for 14-year-old Lee Nicol, who later died, and declared the major incident on the ambulance radio at 3.21-3.22pm. When senior officers arrived, Eason followed instructions, staying on duty until 5.30am the next day.

“Do you think those were the actions of somebody who froze, Mr Eason?” Richards asked.

Approximately 40 people whose relatives were killed in the crush, mostly parents whose children died, listened in silence as Eason gave his evidence.

The NHS principle in a simple handbook