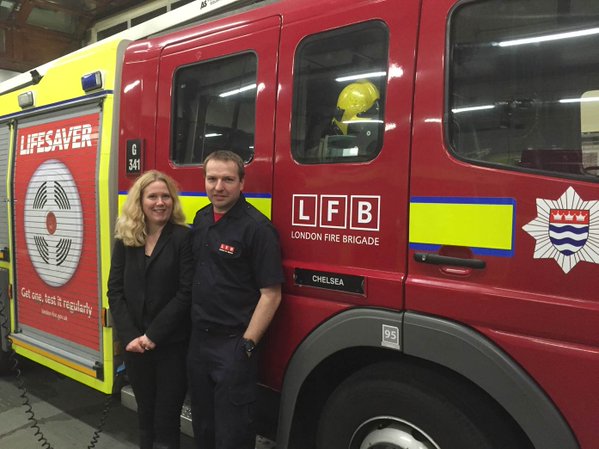 Since 2006 Mark Whitfield, 39, has been raising money to buy decommissioned ambulances and mobile clinics and delivering them all over the world to places in real need. He renovates them in his own time making them more robust and equipped to deal with incidents in developing countries. Recently Mark sent six ambulances to Sierra Leone to help in their fight against Ebola and treat casualties.

With two supporters, Mark took part in the Dakar Rally in an ambulance to show how it could deal with the rough terrain. They successfully took it across the Sahara Desert and delivered it to Senegal.

Mark has served as a London firefighter for five years and was previously a London Ambulance Service Emergency Medical Technician and continues to work for them part-time. He has set up a charity called Global Aid Vehicles and Mark’s work aids UK charities such as St John Ambulance by helping them dispose of obsolete vehicles and ensuring the vehicles have a productive second life once decommissioned.

“Mark is a credit to London Fire Brigade and his unselfish acts have benefited the world’s needy and given a new lease of life to decommissioned ambulances. I congratulate him on his well deserved award.”

“It was completely unexpected but very nice to receive the recognition for the work my supporters and I have done to bring medical equipment to those in need. I’d like to thank Ian Miller and my wife Vivi who nominated me. My wife has been a great supporter of my charity work and this award explains the various questions she’s been asking me over recent months; I now understand that she was gathering information for the nomination.

“In nearly a decade we’ve delivered around 30 ambulances across the world including shipping three ambulances to Djibouti and Somaliland where there previously were none. In gathering information for the nomination my wife was in touch with the former Ambassador for Senegal who told her that the Ambulance we delivered in January 2007 is still in operation which is fantastic news considering the terrible roads and dangerous traffic.”

“I heard of Mark’s work for human and animal welfare from his wife, Vivi, when we worked together. I was amazed when I saw a map and a list of countries where Mark had delivered ambulances and animal clinics that he had acquired and renovated himself. He has dedicated so much time and effort over such a long period that I felt strongly that he deserved formal recognition.

“The Brigade has helped Mark store ambulances while they’re being renovated and very kindly agreed to support the nomination. I was proud to be able to prepare the submission with Vivi’s invaluable assistance and hard work, and I’m delighted to see Mark awarded an incredibly well-deserved British Empire Medal.”

CES2016, the Ambulance Drone is a step closer to reality