Kasubi Tombs fire outbreak: an angry crowd is always difficult to manage. This story reports the experience of a member of Uganda Red Cross Society who witnessed to the fire of the historical site, Kasubi Tombs caused by unknown reasons.

THE CASE – The Kasubi Tombs, a 10-minute drive from the center of the Ugandan capital, Kampala, are the burial grounds of the Kabaka, the kings of Buganda, the largest ethnic group in Uganda. 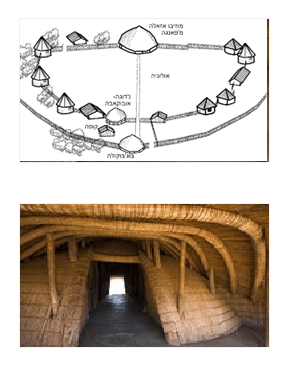 It was on 5th May 2009, in the dark of midnight, when unknown fire gutted the royal tombs within hours, destroying artefacts and royal regalia that had been around for 128 years. The big round hut housed a mausoleum of four kings as well as symbols, books, musical instruments, ceremonial weapons and a big collection of handicraft work.

As the mountainous flames rose towards the sky in the night, more and more people arrived on the scene and looked on in disbelief. Some people attempted to throw buckets of water at the fire but the grass thatched dome was burning furiously, and realizing there was not much they could do to save the house and its items of rich historical significance, they started to wail. Some wept silently and others clasped their hands over their heads, as the hungry flames tore through the dry thatch.

As all this was happening, everyone was trying to reach out for responding agencies especially the police fire department and the Red Cross. As Uganda Red Cross, it was unfortunate that we could not officially do response since it was late in the night. I only managed to mobilize a team of 3 senior RCAT members and we hit the scene for assessment within 20 minutes after the alert.

Also, the police fire team arrived an hour or more, after the outbreak. They could hardly stop the fire, they got short of water and had to return to base for refills. The pride of Buganda–one of Africa’s oldest traditional kingdoms–quickly burnt to ashes. To many Baganda, it was like some close relatives had died!

Meanwhile, the community became hostile to everybody in the umbrella of emergency response. More so, 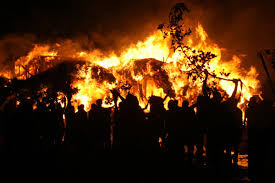 anger rose when the military began to move loyalists away from the area. As fire tracks returned, other sister responders had started to flow but were all obstructed by a hostile crowd.

Uniform and non-uniform security forces fired live bullets to control the violent crowds. On the right, some of the victims of bullet wounds being carried for help.

Fortunately, the police together with the military managed to calm the situation using all possible ways, including firing warning bullets and tear gas. By morning, the area became overcrowded by the number of people which was growing every single minute. Seeing all these events occurring at the same time, I was triggered to setting a strategic site for operation and also beefed up my team with more 18 volunteers well identified and skilled, called for two ambulance vehicles and deployed radio handsets to every volunteer to ease communication.

I immediately gave a briefing to every Red Cross volunteer on the scene as soon as I got all the logistics I had requested for from head offices. We clearly divided roles and I was the team leader. Together with the team we quickly started to attend to a number of cases from the crowd which were majorly fainting, heart attacks and convulsions as many people were traumatized by the event.

Suddenly, shouting sound with an exchange of stones begun where we took cover behind a roadside shelter, two army security officer stood next to us out of the blue instructing us not to move. In a period of 20 minutes, another officer called out “Red Cross! Have this one and attend to he was bleeding from the rib cage” more causalities were also referred to us and others would just run straight at the security personally began to shoot direct to the violent crowds in exchange for missiles of stones.  Many of the causalities were profusely bleeding from the gun shorts and the others were carried to us when unconscious and the crowd demanded us to save their life.

As if the situation had calmed down for some minutes by 11:00 am, however more tense stoning begun afresh and this time we all scared to an extent that I went under the ambulance whose engine was running.it took us some time to re-converge and after some minutes, security took over and we began with the referrals. The seriously injured were immediately referred to Mulago National Referral Hospital by Red Cross and St. Johns Ambulance.  The Police cordoned off the scene, a standby Ambulance Service was set up by Uganda Red Cross to provide immediate first aid services.

At this level, the community had become so charged that most of the media was doing live broadcast which made the coordinating office and the entire headquarters scale up the response teams by, one sending more response cars (staff in senior management positions) at the head office came on board.

Now, challenges rose as more staff came in, many were now using their official positions which were not necessary at that point. Much of the instructions and commands failed thus failing to manage the scene too. The fact that other sister organizations with ambulances were taking part, issues of first aid and case management was done “on-board” not “on-ground” and whichever case needed more care, it was referred to the nearest health centres and later to the national referral hospital.

Despite the fact that police holds the mandate (at National level) of protecting the people and their property, this time it was compromised and the crowds had begun accusing them of failing to put out the fire. Such angry accusations attracted the deployment of more army units who began to use more force to punish and move away crowds from the scene regardless of one’s role at the scene hence more cases of injury when many tried to run for their safety.

At this time the crowd was more cooperative as the kept on calling us for the causalities with different injuries until late in the evening but with heavy deployment around the entire place. We retired day one and came back the following day but this time the cases were different as now many were fatigued and this caused the National Referral Hospital deploying staff with a mobile clinic which was attending to only urgent cases.

The regarded non-argent cases would now be referred later. The forces had to deploy more and more personal to calm down the situation which was later achieved.

ANALYSIS (MANAGEMENT) – At this time being that this was the first time such an incident happening to the site and the area many people were taken un wearer that little knowledge was known to the majority event to the firefighters who at one time run short of supplies. The fact that that the incident occurred to a historical site which majority of the masses had a cultural attachment to it created mixed feelings within the people hence different response and reactions

This made response so had that on one side we were associated with the government for our work despite our neutrality position simply because we never responded immediately as expected. To others, we were supported by the community as they saw us working tirelessly and attending to everyone in need.

The fact that it becomes a national concern heavy deployment in the area increased the violence of the community making it so hard to respond as there was no guarantee of the safety for the response teams.

The fact that other key stakeholders were on board which would have been an advantage was as if we were competing on who it bests. (Could only be noticed by one who was keen in the way of doing work) why because we had more members on the scene than any other responders which also has both sides more so in management.

The fact that it went out of the expected days and hours a lot changed in that the team its self was fatigued which was had to work on, the fact that it was an emergency supplies and logistics were compromised due to the fact that its more than the expected , the behavior of the teams since somewhere directly affected due to the cultural background although could not disclose but when opportunity strike that was expected making it so difficult to tell, the demand for update by the office in the middle of the early hours of the response that was so challenging to make as we were running for our safety yet for them they were enticed by the broadcasts which necessary for them to inquire time to time

For the fact that we deployed basing on the usual response and discovered it was not business as usual, attracting the senior management team taking part, which also worsened the by having too many instructions created confusion that was nearly messing up the entire operation that was over raided by the factor of time.

What do I learn from all this, that communication is important and that numbers matter but subsections and delegation is key for such an operation as you cannot manage the welfare of the members as it is very key? Different incidents affect team members differently which impacts a lot to the entire response and is never easy to detect at such a period. Taking things for granted is very bad because the issue of identification owned by the volunteers which case self-deployment that compromises accountability of personnel has been known and has continued to exist is most likely to reoccur in future as it is now had to recall all the reflector out.

The study was done to document disaster management strategies and approaches and to assess the impact of fire on human lives, health hazards, and future implications of a man-made disaster.

Three disaster management strategies were adopted to manage the crisis which included; (i) Response, rescue and security (ii) Casualty management, and iii) Rehabilitation.

The initial response, rescue and security were conducted shortly after the outbreak of the fire by the police and army. The outbreak became a security concern; the mass was blaming the police for delayed response to control the fire. The people became wild and were stopping the police fire vehicles from assessing the scene. Tight security was deployed to control the situation and so as the police to be able to extinguish the fire. The causalities that had sustained burns and injuries during the stampede were referred to Mulago hospital by Red Cross Ambulance.

Falck and UN Global compact together to strengthen sustainability efforts