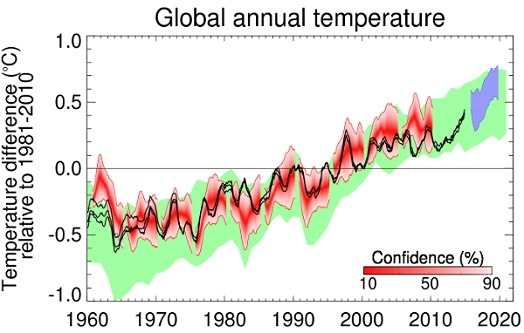 Natural disasters and global temperatures: A bad prediction for the period from 2016-2020

This forecast also suggests global temperatures over the next five years are likely to be well within, or even in the upper half, of the range of warming expected by the CMIP5 models, as used by the Intergovernmental Panel on Climate Change.

Doug Smith is a leading expert on decadal prediction at the Met Office Hadley Centre. He said: “We expect the global average temperatures for 2016 are likely to be at least as warm as 2015 – a record-breaking year. Considering the influence of the very strong El Niño, currently active in the Pacific, then 2016 could well be another record year.

“However, the run of consecutive record years for globally-averaged temperature may end in 2017, as the influence of the current El Niño ends, nevertheless high levels of greenhouse gases in the atmosphere will continue to influence the climate and drive very warm years.”

Averaged over the five-year period 2016-2020, forecast patterns suggest enhanced warming over land, and at high northern latitudes. There is some indication of continued cool conditions in the Southern Ocean and of relatively cool conditions in the north Atlantic. The latter is potentially important for climate impacts over Europe, America and Africa.