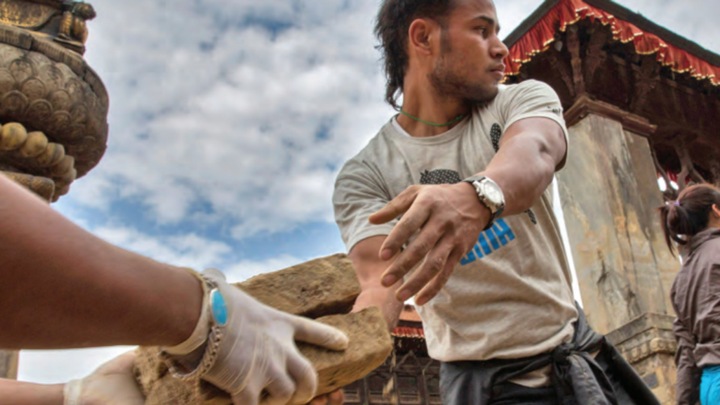 It was a Tuesday morning. Normally Truong Thanh Truat, from the Hoang Tin commune in Hoang Hoa district, Vietnam, would head out to do his daily work as a fisherman. But yesterday was different, as he took part in the disaster response simulation drill on the beach of Hoang Hoa.

The simulation was part of a public event to celebrate the International Day for Disaster Risk Reduction on 13 October, and to launch the World Disasters Report 2015 in Vietnam’s Thanh Hoa province. The event was organized by the Viet Nam Red Cross Society, together with the International Federation of Red Cross and Red Crescent Societies (IFRC), the Department of Natural Disaster Prevention and Control and the Northwestern Steering Committee.

This is the second year the Viet Nam Red Cross Society organized the launch of the World Disasters Report. The report is a premier publication of the IFRC that has been commissioned every year since 1993. Its purpose is to highlight the challenges, trends and innovations in disaster risk reduction and crisis management using evidence-based research.

With this year’s theme, Focus on local actors, the key to humanitarian effectiveness, the World Disasters Report examines the complex relationship between local and international actors in responding to crises. It presents a case for the localization of aid and more equal partnerships between local organizations and their international counterparts.

“We know that local actors are always the first to respond to emergencies,” said Anne Leclerc, the head of regional delegation for the IFRC in Southeast Asia, during her speech at the event. “Local actors determine the effectiveness of any operation as much as, if not more than, their supporting international partners. Therefore, they must be at the centre of response. And they must also be at the centre of humanitarian and development efforts.”

The fact that the event was organized in the district and involves the participation of community members and Red Cross volunteers reflect the topic of the IDRR this year,Knowledge for life, as well as the commitment from the National Society to promote community participation in emergency and development work.

“Vietnam was chosen to launch the World Disasters Report 2015 not only because it is a country affected by natural disasters and climate change, but also because the Viet Nam Red Cross Society is increasingly playing an important role in building the capacity of local communities in preparing for disasters and in supporting local authorities and relevant agencies in responding to disasters,” said Doan Van Thai, Vice President and Secretary General of the Viet Nam Red Cross Society. “Investing in community-based disaster risk reduction and contributing to resilient communities are among the priorities of the National Society.”

Vietnam is one of the five countries most affected by climate change. Each year, the country suffers from an average of 10 to 15 floods and storms. In 2013 alone, the number of floods and storms in the country hit the record of 14 in 10 years, affecting over 4 million people.

Your hands can save more lives with the new guidelines