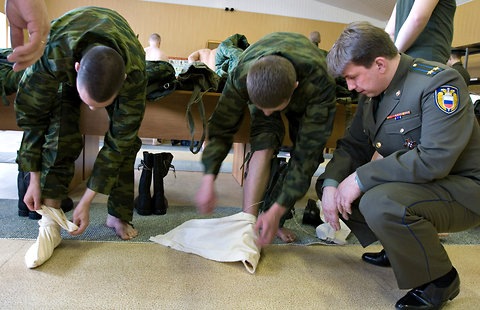 No more "portyanki". After 5 centuries, the Russian army renew the equipment of their soldiers

No more foot wraps for the Russian army. This is what Sergey Shoygu, Russian Ministry of  Defence, has said during an official press release in the last few days. From now on, the Russian army will be allowed to wear “regular socks” instead of the traditional “portyanki”, footwraps made of cotton and other fabrics that were used in order to protect the foot from the leather of the boot.

After 5 centuries, here’s the “great” turning point in the Russian army’s equipment. The word “portyanki” literally means “footwrap” and is a typical personal equipment full of mythic meaning, at times almost legendary. In the past, imposed to the soldiers for the first time from Peter the Great, the portyanki was adopted to protect the foot from blisters that may occur from the contact between the foot and the leather boot.

The portyanki is present in the modern imagery as a distinctive sign of the Russian army. The footwrap, if well made, is said to be far more efficient than a regular sock as it keeps the foot warmer. This technique was adopted also for purely economic purposes; rumors say, at that time, the Zar too wanted to save money avoiding the costs of having the tailors sew thousand of winter and summer socks.

Traditionally, the Russian soldier has been obliged to learn, before maneuver a gun, to make a footwrap with the portyanki. The revolution of the Russian army’s equipment, started six years ago but never fully accomplished because of some bureaucratic issues, seems to have entered the last phase: “socks for everyone”.

How unprepared are you for an earthquake?

From Apple a valuable app dedicated to pediatric emergencies

Ambu bag, salvation for patients with lack of breathing