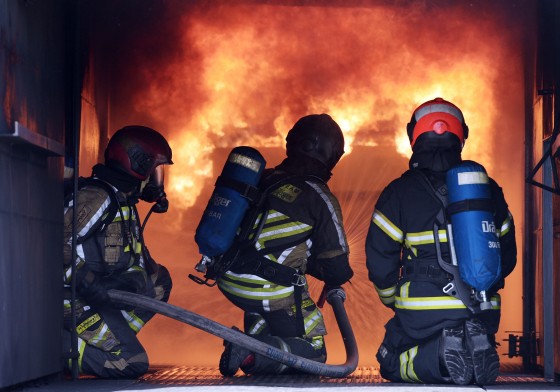 Evacuation orders have been given to 13,000 people in California as firefighters struggle to contain some 20 wildfires.

Some 9,000 firefighters worked throughout Monday in steep terrain and rugged conditions, officials said.
The biggest blaze – the so-called Rocky fire north of San Francisco – has already consumed more than 90 square miles (233 sq km) of land.
On Monday afternoon the fire jumped a highway that had been containing it.

Firefighters were still trying to contain the Rocky Fire into Monday evening but officials say it continues to move fast.

Officials described its rate of growth as unprecedented after it tripled in size over the weekend.

At least 24 homes were destroyed as the blaze was whipped up by winds that fuelled the flames, our correspondent says.
“I’ve never seen a fire act like this one,” evacuee Vicki Estrella said.
“It’s amazing the way that thing spread. There was smoke 300ft (91m) in the air.”
Four years of drought in the western US have left the landscape tinder dry. Coupled with unseasonably humid conditions, lightning strikes and gusting winds, this has posed a severe challenge for fire fighters and water-dropping aircraft.
While some progress has been reported in tackling the blazes, partially due to a slight fall in temperatures, there is no rain forecast.

Other parts of the western US are also seeing wildfires. More than 300 people were moved from the path of a fire in Washington state, while another burned over 15,000 acres in Oregon.

Ambulances in the world: Italy queen of Bulgaria with MAF