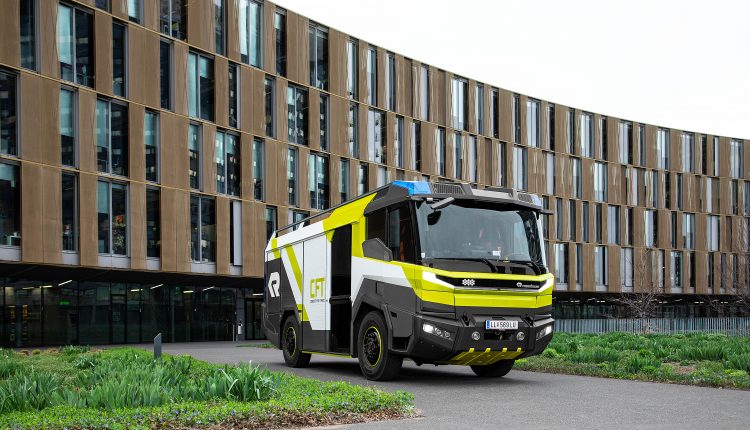 Rosenbauer Deutschland, a company of the Rosenbauer Group, and the Berlin Fire Department plan to jointly develop a hybrid electric fire engine in the next two years.

To this end, representatives from both sides have today entered into a so-called “innovation partnership”, which will be responsible for carrying out the project “eLHF” (german equivalent for “eRFF”/ electric rescue and firefighting vehicle) and, following a successful trial, will manufacture vehicles accordingly. The project budget amounts to a total of approximately € 1.8 million; 90 per cent of this consists of subsidies from the Berlin Program on Sustainable Development, which in turn is fed by the European Regional Development Fund and the state, while the rest comes from the Berlin Fire Department’s own budget funds. The “Concept Fire Truck” (CFT) of Rosenbauer forms the technological basis for the eLHF.

Under European public procurement law, the innovation partnership is a special form of award procedure. The goal is to develop an innovative product and to then purchase it. What initially motivated the Berlin Fire Department’s concluded tendering procedure were the growing demands with regard to environmental protection and the complex exhaust systems of conventional chassis, which are having an increasingly negative effect on the design and operation of firefighting vehicles.

Consequently, the hybrid project vehicle is designed to help contribute towards reaching Berlin’s climate protection goals. Specifically, this entails a reduction in pollutants of around 14 t/a CO2 in comparison with conventional, diesel-powered rescue and firefighting vehicles; it will also feature a disaster-proof design. In addition, the project specifications also provide for reduced noise emissions as well as an improvement in occupational health and safety, technical availability and communication.

“With the project ‘eLHF’ we aim to provide an answer to the complex demands made of fire engine technology and develop a path to the integration of new, environmentally friendly drive technologies in the fire brigade’s emergency services”, states Karsten Göwecke, Permanent Representative of the Fire Brigade Councillor of Berlin.

“Our goals in introducing these emergency vehicles are not only the reduction of emissions that threaten both the climate and our health; we are also shining a spotlight on operational safety and ergonomics. The project ‘eLHF’ allows us to completely re-imagine the concept of the fire engine, and to integrate solutions for future challenges faced by the fire brigade into a vehicle concept that will stand its ground in the future.”

“For our ‘Concept Fire Truck’, the innovation partnership with the Berlin Fire Department represents an important milestone on the way to series production readiness,” explains Dieter Siegel, CEO of Rosenbauer International. “In this way, we can create an optimised pre-production vehicle that has truly been put through extensive testing, while at the same time increasing our understanding of the ideal way to integrate it into actual operation. I am pleased that the Berlin Fire Department, which has a rich tradition, is assuming the role of incubator here, and at the same time will also be one of the first practical users of the ‘fire engine of the future’.”

Global market for innovative CFT technology estimated to reach around 3,200 vehicles by 2030
The “Concept Fire Truck” by Rosenbauer was presented to the public for the first time in 2016. The concept study anticipates megatrends such as global warming, demographic change and urbanisation, as well as the challenges these changes pose for fire brigades. The use of electric drives has enabled the creation of a completely new type of vehicle architecture that is fully adapted to these future scenarios and sets new standards in terms of functionality and ergonomics.

The main field of application for CFT technology is initially the municipal firefighting engine, but plans are also in place for it to subsequently be transferred to other types of vehicle. The “Concept Fire Truck” attracted particular interest from the member states of the “C40 Cities Climate Leadership Goals”, which aim to adopt a leading role in climate protection; talks with further model regions are ongoing.

Rosenbauer estimates that the global market for the innovative CFT technology will reach around 3,200 vehicles by 2030; in Europe, as many as 700 to 800 units could be in use by 2025.

Pet-friendly emergency shelters? In case of evacuation where can you go with your buddies?

#WorldToiletDay2018 - "When nature calls, we need a toilet": together to improve sanitation

COVID19 in France, even the firefighters on the ambulances: the case of…

Chernobyl, a fire makes radiations increase in the exclusion zone. Firefighters at…

Only 100 days left until the gates open on INTERSCHUTZ