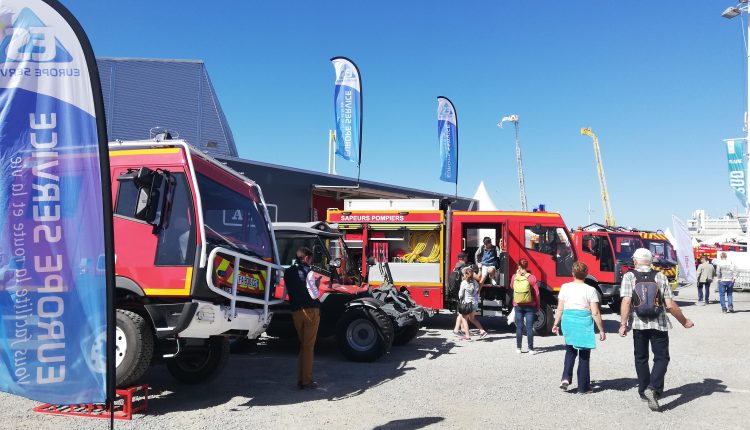 From 18 to 21 September 2019, The National Federation of the Sapeur-Pompiers is organising the 126th edition of the National Fire Brigade Congress in Vannes.

The congress will have an exceptional flavour after the exciting event held in the Alps in 2018. The new formula of the congress has the ambition to anchor the Sapeur Pompiers presence even more in the community, as a key point for political, technical and industrial discussions.

The Congress of the Fire Brigade in France

“I like to say – write in a statement Grégory Allione, FNSPF President – that this is the largest barracks in France. We will find the fundamental elements of a national congress: the meetings around the main topics that animate the community (solidarity, commitment, volunteering) the exhibitors and their innovations, conviviality too. All these ingredients will this time be mixed in Breton style by our friends from Morbihan.

There is no doubt that, as every year, the number of delegates, visitors, exhibitors and volunteers will be there and therefore equal to this event. It is also important to underline that its organisation and success are the results of the synergy deployed between our associative network and therefore our UDSP 56 and the public institution that guarantees the institutional response, SDIS 56. I would like to thank all those who are mobilising to organise this major event, our national firefighters’ congress. This adventure exists thanks to you and for all of us”.

Reforming the emergency dispatch and response in France

The Congress toke place during one of the most important political discussion in the French EMS service. The Minister of Health, Agnès Buzyn, presented 12 measures on September 09, to face the current crisis about hospital emergencies. The rules are part of a law that aims to rebuild the Emergency Department. The Sapeur Pompiers of France welcomes the idea of the Minister to involve the Fire Brigades in the discussion about the reform of pre-hospital emergency services. The debate about the Health Care Access Service is open to the emergency rescue workers within 2 months to define the final rules.

There are many ideas about the right solutions to create a better national ambulance service, but Sapeur-Pompiers are convinced that the creation of a nationwide unique number 112 is a pillar of this reform. The service can be managed by the departmental and interdepartmental platform. To better face minor emergencies, it will be essential to add an H24 health number (likewise 1111 in the UK) dedicated to advising, medical expertise and unscheduled demand of care by the citizen in difficulty. Activity that seems to be the natural vocation and evolution of the current 116-117

Following the current crisis in hospital emergencies, the Minister of Health, Agnès Buzyn, presented 12 measures on Monday, September 09, 2019, as part of a pact to rebuild the Emergency Department. The reaction of the Fédération Nationale des Sapeurs-pompiers de France (FNSPF) to the announced measures.

The FNSPF will take part in this consultation and reaffirms its position in favour of the creation of 112 as the single emergency call number, managed by departmental, interdepartmental platforms. The 112 will replace the 15, the dispatch urgency in France. lIn addition, the FNSPF considers it essential to add an H24 health number dedicated advice, medical expertise and unscheduled demand for care, which seems to be the natural vocation of the current 116 117.