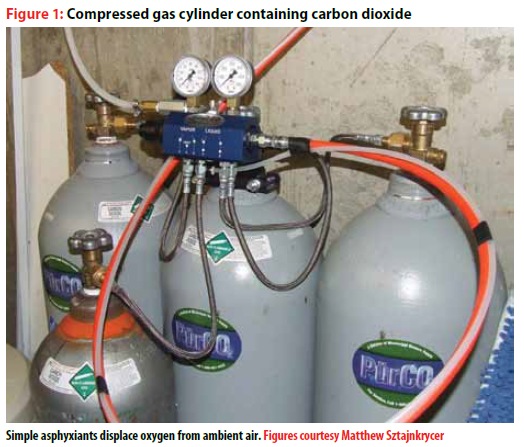 JEMS – Two employees of a local restaurant go down to the basement to investigate a leak in the pressurization system for the carbonated beverage dispenser, which is producing an audible hiss. On entering the basement, one of the employees, a healthy 64-year-old male, notices the hissing sound is coming from a compressed gas cylinder of carbon dioxide with some frost on it. (See Figure 1 download below.)

He turns to pick up a crescent wrench to close the valve and falls to the ground unresponsive, with seizure-like activity. His colleague and others at the restaurant attempt a rescue but are unable due to a sensation of suffocation. Police officers arriving on scene recognize the potentially hazardous atmosphere and prevent any further attempts at entry.

Jason Chandler, NREMT is a firefighter with the Rochester (Minn.) Fire Department.

Matthew Sztajnkrycer, MD, PhD is medical director for the Rochester (Minn.) Fire Department and associate professor of emergency medicine at the Mayo Clinic in Rochester, Minn. He can be reached at sztajnkrycer.matthew@mayo.edu.

Global health workforce in crisis: How to reverse their role in Humanitarian crisis?