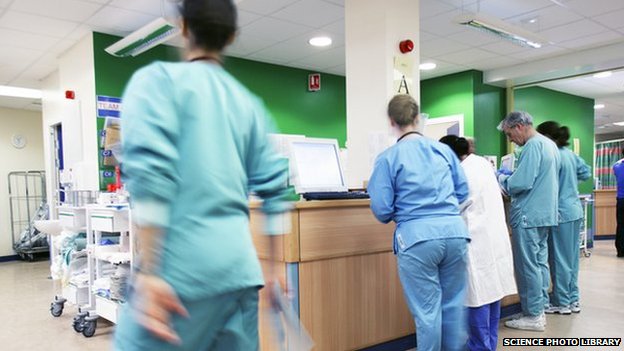 Health spending has become a major political battleground in the run-up to the general election, as the parties compete to offer answers to the huge challenges facing the NHS in England.

Pressures on the NHS budget – £115bn in England in 2015/16 – are mounting. A report published in October warned that the health service in England could face a £30bn annual shortfall by 2020. It said that £22bn of reforms could be made to make the service more efficient but the NHS would still need above-inflation rises to plug the other £8bn of the estimated shortfall.

Here is a guide to what we know so far about the main parties NHS spending plans for the next five years.

The Conservatives have promised to ring-fence and “protect” the NHS budget, so spending would rise in line with inflation.

In addition, in the 2014 Autumn Statement, Chancellor George Osborne announced an extra £2bn a year – beginning in 2015/16 – for frontline health services across the UK, which he described as a “down payment” on the highlighted £8bn annual shortfall.

Mr Osborne said: “Because of careful management, we can afford to put… underspend money into our National Health Service to cope with the pressures it faces: £2 billion every year to the front line of the NHS. Not money that busts our plans, but extra money that is available because we have a plan. That is a down-payment on the NHS’s own plan, proving definitively for anyone in any doubt that we cannot have a strong NHS without a strong economy.”

But the Conservatives came under fire after it emerged the £2bn sum includes £700m of underspend which was already allocated to the NHS budget. Mr Osborne was accused of re-allocating existing money.

The extra £2bn a year is for the whole of the UK and includes £300m funding for the devolved nations to be allocated under the Barnett formula.

The Tories have said the extra £2bn would be spent every year of the next parliament but haven’t specified where the money for the years beyond 2015/16 would come from. The party has specified that £300m of the £2bn will be spent each year for four years modernising GP surgeries across the UK, paid for through fines imposed on banks after the Libor rate-rigging scandal.

Labour has promised to keep the NHS ring-fence and spend an extra £2.5bn a year – over and above the Conservative plans – across the UK by the end of the next Parliament, paid for by a mixture of its “mansion tax”, tax avoidance measures and a windfall tax on tobacco companies.

The proposed tax avoidance clampdown involves stopping hedge funds avoiding hundreds of millions in tax on shares, closing the ‘Eurobonds’ loophole which is being exploited by some large firms to move profits out of the UK and stopping ‘umbrella companies’ being used to avoid tax and national insurance.

The mansion tax would be levied progressively on properties over £2m, with “protections” for people who do not have a high income but happen to live in an expensive property. Labour estimates that the mansion tax would provide £1.2bn of the promised £2.5bn.

As with the Conservative pledge, a proportion of the extra money would be allocated to the devolved nations under the Barnett formula. Labour’s leader in Scotland, Jim Murphy, provoked a row by announcing that 1000 extra Scottish nurses would be funded from Scotland’s proportion of the money raised by the mansion tax.

Labour leader Ed Miliband told the party’s 2014 conference: “We will transform our NHS… we need doctors, nurses, midwives, care workers, who are able to spend proper time with us, not rushed off their feet. So we will set aside resources so that we can have in our NHS 3,000 more midwives, 5,000 more care workers, 8,000 more GPs and 20,000 more nurses. And in order to pay for it we won’t borrow an extra penny. Or raise taxes on ordinary working families. ”

Labour also says it wants to bring health and social care together but has not specified details of how it would do this, when it might do this or what it might cost.

The Liberal Democrats have promised to meet “in full” the £8bn extra the NHS managers say is needed by 2020.

The plan is broadly based on the economy recovering in line with current projections made by the Office for Budget Responsibility, and would go alongside continued efficiencies and reforms in the NHS.

Lib Dem leader Nick Clegg said: “The big, big difference between ourselves and Labour and the Conservatives is that we have said that once we have dealt with the structural deficit, once we have dealt with it in 2017/18, we will link the amount of money going into public services – including the NHS – to the growth of the economy.”

In the shorter term, the party has set out some commitments to extra spending.

The Lib Dems are promising an extra £1bn a year above Conservative plans from 2015/16 – to be funded from reducing tax relief, increasing tax rates on share dividends for high earners, and repealing the Conservative policy of allowing businesses to offer shares to workers in return for giving up their employment rights. Half of this £1bn would be spent on mental health services, a Lib Dem priority.

– Baselining into the budget of the NHS the additional £2bn announced in the Autumn Statement for 2015/16.
– Investing a further £1bn in real terms in 2016/17, as outlined above
– Assuming the deficit is tackled by 2017/18, they would then increase health spending in line with growth in the economy.

The party also says it will ring-fence the NHS budget and pool the health and social care budgets.
UKIP is currently the only main party not pledging any extra cash to the NHS; it is instead committed to reprioritising what the NHS does.
The party has made no commitment to keep the NHS ring-fence and has in fact hinted that they would get rid of it.
UKIP leader Nigel Farage has said the idea of replacing the NHS with an insurance-based system is “a debate that we’re all going to have to return to”.

– Keeping the NHS free at the point of delivery
– Ensuring all migrants and visitors have NHS-approved medical insurance as a condition of entry to the UK, saving an estimated £2bn per year
– Spending £200m of this saving on ending hospital car parking charges

The Green Party says health spending should be “maintained at around the average in the European union”.

The party says an NHS tax, earmarked to increase direct funding of the NHS, would be introduced as part of general income and other taxation.

Splint: How to make it?