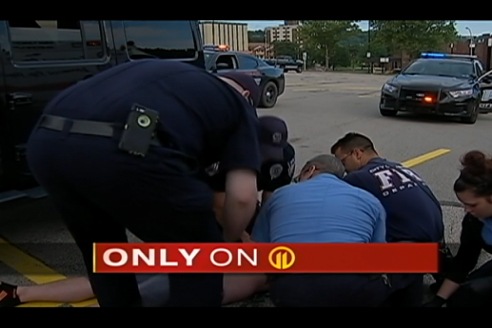 WHASHINGTON – It’s an incredible footage caught on camera by the Channel 11 cameraman and journalist, the resuscitation maneuver that Police Officers made on an unresponsive man in a Washington parking lot on June, 24th. The unresponsive man was noted slumped in his car by the Channel 11 News photographer Dave Clark. “I look back, his head’s back. He’s purple” the reporter said. “I tried shaking him, yelling, ‘Hey, dude”. The reporter pulled the man out of his car and began performing CPR, while Channel 11 News reporter Cara Sapida dialed 911.

The Police administer lifesaving CPR when they arrive on the scene, meanwhile Paramedics comes. Washington Police Chief Chris Lupino said the man was eventually revived after paramedics realized the man had overdosed on heroin and administered a dose of Narcan. Seconds later, they gave him Narcan and his eyes were bright blue and wide open. An officer at the scene said if it weren’t for Clark beginning CPR prior to their arrival, the man likely would have died.

“Your cameraman originally brought his pulse back,” Washington Police Officer Matt Karlowsky said. “He probably would’ve died if your crew wasn’t there.”
Clark said he hopes the man will do good things with his second chance and had a message to share with others.
“Don’t even give it a first chance to get a second chance,” he said. “If anybody saw what I saw, you wouldn’t want to even touch the stuff. You’d be afraid to get it on your skin.”
Lupino said officers at the scene discovered what they believed to be heroin in the man’s car.
“We have been getting a high amount of overdoses in the last month,” he said.

The H145 heads to Queensland in its Australia Demo Tour

What Is Meconium and What Causes it?

Concussion: what it is, what to do, consequences, recovery time

Recognising the different types of vomit according to colour