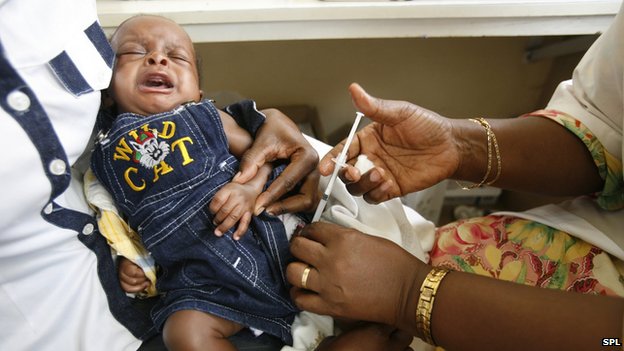 The price of life-saving vaccines has skyrocketed leaving some countries struggling to fully immunise children, Medecins Sans Frontieres warns.
A report by the charity says there has been a 68-fold increase in prices between 2001 and 2014.
It accused the pharmaceutical industry of overcharging and highlighted cases where rich western countries were getting a better rate than poor ones.
Industry said its pricing reflected the cost of manufacture.
The medical charity’s report says prices are now “prohibitively high” and were “calling into question the sustainability of immunisation programmes”.
The document “The Right Shot” says the number of vaccines offered has doubled since 2001, but the price has increased even more so.
In 2001, it cost $0.67 (£0.44) to vaccinate against tuberculosis, measles, diphtheria, tetanus, whooping cough and polio.
Since then rubella, hepatitis B, Haemophilus influenzae type b, pneumococcal diseases, rotavirus and the human papillomavirus (HPV) vaccines have been added to vaccination programmes.
But the cost has leapt to $45.59 (£30.07) per child.

Unaffordable
Rohit Malpani, from MSF, said: “The price to fully vaccinate a child is 68 times more expensive than it was just over a decade ago, mainly because a handful of big pharmaceutical companies are overcharging donors and developing countries for vaccines that already earn them billions of dollars in wealthy countries.”
The organisation highlighted cost of the relatively new pneumococcal vaccine, which they say accounts for 45% of the total cost of vaccinating a child in the poorest countries.
Mr Malpani says there needs to be greater transparency about the costs involved in producing the vaccines.
The report also cites one instance of hospitals in Morocco being charged more for a dose of the vaccine than France.
“We think it’s time for GSK and Pfizer to do their part to make vaccines more affordable for countries in the long term, because the discounts the companies are offering today are just not good enough,” Mr Malpani added.
MSF is calling on the two pharmaceutical companies to cut the price of the vaccine to $5 (£3.30) per child.

The poorest countries have their immunisation programmes supported by the Gavi vaccine alliance.
The MSF report warns that it is the middle-income countries are not benefitting from vaccines.
However, it adds that progress means many countries are about to lose Gavi support.
It will happen to Angola within the next year and the country’s vaccine bill is expected to increase by 1,500%.
In a statement, Pfizer said it was “proud” of its vaccination commitments around the world.
It said: “The price of Prevenar 13 [the pneumococcal vaccine] reflects the fact that it is one of the most complex biologic products ever developed and manufactured.
“For example, each one of the 13 individual components requires a separate process for purification, conjugation and testing.
“It takes more than two years to create one batch of Prevenar 13, encompassing some 500 separate quality control tests prior to product release and distribution, multiple facilities and hundreds of trained professionals.”

GSK added: “Around 80% of all of GSK’s vaccines, including our pneumococcal vaccine, are provided to developing countries at a substantial discount to western prices.
“Our pneumococcal vaccine is one of the most complex we’ve ever manufactured, essentially combining 10 vaccines in one.
“For Gavi-eligible countries, we are providing this vaccine at a deeply discounted price. At this level, we are able to just cover our costs.
“To discount it further would threaten our ability to supply it to these countries in the long-term. Nevertheless, we continue to look at ways to reduce production costs and any savings we make we would pass on to Gavi.”