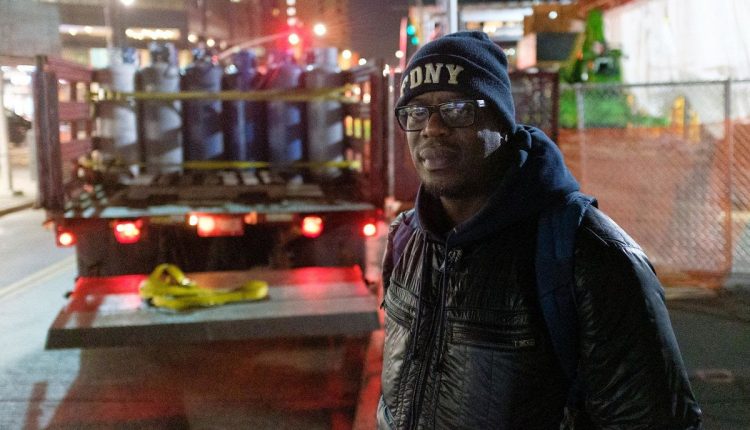 Supervising Fire Inspector Jon Watson alerted his FDNY colleagues to the need to remove unsecured propane tanks from a construction site at 540 Fulton Street in Brooklyn on Friday. The tanks are on the truck behind him. (Gardiner Anderson / for New York Daily News)

By Emergency Live On Jan 23, 2019
Share
A sharp-eyed FDNY fire prevention inspector averted an explosive situation in Brooklyn on Friday night when he noticed a baker’s dozen of big propane tanks stored in the open at a construction site.
Jon Watson, an off-duty supervising fire prevention inspector who lives in Fort Greene, was headed to the bank when he noticed the tanks at 540 Fulton St., construction site of a 511-foot-tall, 40-story mixed use tower.
“I passed by and saw three propane tanks on the right side of the construction site,” Watson said. “I know they normally have to be stored in a cage.”
Watson looked to the left of the three tanks – “and I saw ten more.”
He called his colleagues at Engine 226 a few blocks away. They loaded the tanks onto a city truck and hauled them away.
Watson said summonses will be written to the contracting company. The site’s general contractor, identified on signage as Pav-Lak Contracting, could not be reached late Friday.
“They’re supposed to be stored when no construction is going on, so I called it in right away,” Watson said. “I knew it was a safety hazard. It’s right near two businesses. That’s quite a bit of propane.”
Share FacebookTwitterWhatsAppTelegramPinterestLinkedinEmail

Resilient Cities in the Word! - The Water Management in Da Nang, Vietnam