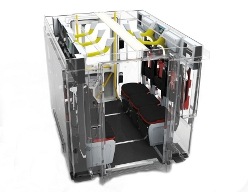 The ECE R-29 regulation describes the test procedures to ensure that a Cab could withstand a fatal crash of a truck, including a front impact and a roll over during an accident. Comparing to the norm ECE-R29/02 the new regulation /03 increases the level of requirements for passenger’s safety. Since this regulation has to be applied as of 2017, Magirus went ahead and already provides now the highest safety standards.

Whereas the regulation /03 demands regarding roll over strain a static load of 7.5 tons for medium trucks resp. a load of 9.0 tons for heavy trucks, Magirus successfully passed the test with 10 tons static roof load without any loss of survival space inside the cab which is the main criteria for the Crew. Thus the specifications of the norm were exceeded by up to 25 percent.

The energy caused by the loads and impacts are mainly absorbed by the new developed cab bearings, which are also responsible for the maximum comfort level in the Team Cab. Highest safety combined with the highest demands in ergonomics and comfort – this was the guideline for the Magirus engineers when they developed the new concept of the Magirus Team Cab.

About Magirus
Passion and precision, high-tech and craftsmanship: since 1864, Magirus has stood for innovation and tradition – for firefighters around the world. Providing a comprehensive range of state-of-the-art fire trucks, ladders, rescue and equipment vehicles as well as special solutions, pumps and portable pumps, Magirus is one of the largest technology leaders for firefighting technology in the world.

Disaster Activity in US in the last week

HOLMATRO Extrication Challenge: 29 teams from 16 countries have shown their skills at Interschutz