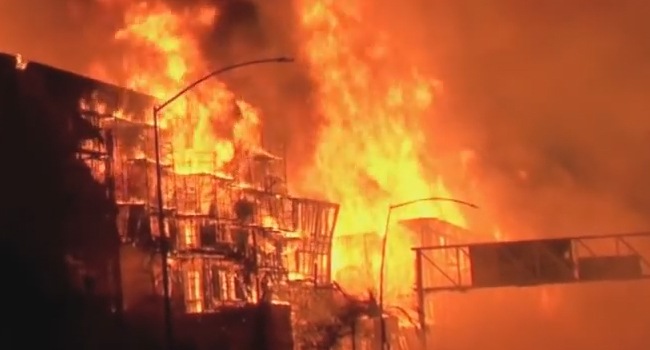 17 minutes in the "Da Vinci" Inferno

Over 200 Los Angeles Firefighters battled a dangerous blaze that ripped through a complex of apartments under construction on the 900 block of West Temple Street in downtown Los Angeles. Firefighters first on scene reported several floors with “fire showing” from the 7 story apartment building. As the blaze intensified, radiant heat melted freeway signs and spread to vegetation and palm trees on the 110 (Harbor) freeway. All lanes of the freeway were shut down in both directions due to the dangerous situation. Several pieces of apparatus were repositioned due to possible building collapse, lack of water in one area and radiant blistering heat. Utilizing Ladder pipes, wagon batteries and portable monitors L.A. Firefighters kept the roaring blaze from crossing Temple Street to more apartments under construction. There were reports that over 500 apartment units covering one million square feet were destroyed in the late night inferno. Miraculously there were no reported injuries, the cause of the fire is under active investigation. -MNR-

Four in five new NHS nurses are from overseas