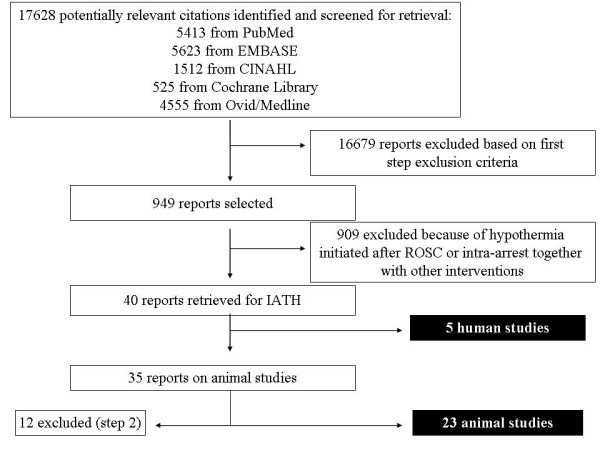 The use of hypothermia has been associated with improved outcomes for survivors from cardiac arrest; however, it has been suggested that the timing of the induced cooling may influence its beneficial effects. Experimental studies have shown that IATH can protect the heart against the ischemic processes occurring after Cardiac Arrest and reduce the neuronal injury secondary to global ischemia. These beneficial effects seem to be significant when IATH is compared not only to normothermia, but also to PATH. Nevertheless, not all of these studies have reported similar conclusions, probably because of the different experimental conditions that have been used. Also, the evidence that IATH is superior to PATH in animal studies is more limited than the evidence comparing IATH to normothermia. Human data on IATH remain limited; however, several large cohort studies have suggested some beneficial effects of IATH on ROSC rates and neurological outcomes, especially if initiated within a short no-flow time. Selective brain cooling may have potential advantages in protecting the brain before reperfusion and has shown promising results in experimental and clinical studies; however, this technique may limit potentially beneficial effects of hypothermia on cardiac function and needs to be further evaluated in the human setting.

Methods
We performed a systematic search of PubMed, EMBASE, CINAHL, the Cochrane Library and Ovid/Medline databases using “arrest” OR “cardiac arrest” OR “heart arrest” AND “hypothermia” OR “therapeutic hypothermia” OR “cooling” as keywords. Only studies using intra-arrest therapeutic hypothermia (IATH) were selected for this review. Three authors independently assessed the validity of included studies and extracted data regarding characteristics of the studied cohort (animal or human) and the main outcomes related to the use of IATH: Mortality, neurological status and cardiac function (particularly, rate of ROSC).

Results
A total of 23 animal studies (level of evidence (LOE) 5) and five human studies, including one randomized controlled trial (LOE 1), one retrospective and one prospective controlled study (LOE 3), and two prospective studies without a control group (LOE 4), were identified. IATH improved survival and neurological outcomes when compared to normothermia and/or hypothermia after ROSC. IATH was also associated with improved ROSC rates and with improved cardiac function, including better left ventricular function, and reduced myocardial infarct size, when compared to normothermia.

Conclusions
IATH improves survival and neurological outcome when compared to normothermia and/or conventional hypothermia in experimental models of CA. Clinical data on the efficacy of IATH remain limited.

Introduction
Use of mild therapeutic hypothermia, or “targeted temperature management” as recently suggested [1], has been recommended in cardiac arrest (CA) patients since the publication of two randomized clinical trials in 2002, the results of which demonstrated a significant improvement in neurologically intact survival for comatose CA patients presenting with ventricular fibrillation (VF) or ventricular tachycardia (VT) [2,3]. Current guidelines suggest that mild therapeutic hypothermia should also be considered in patients presenting with other rhythms although this has been less well studied [4].

Although therapeutic hypothermia has been widely implemented [5], its benefits are still questioned and several issues remain unanswered, including the optimal time to initiate cooling. Animal data have indicated that early cooling after return of spontaneous circulation (ROSC) produces better brain function and neurological recovery than does normothermia, whereas delaying therapeutic hypothermia significantly limited these beneficial effects [6,7]. There are also experimental data suggesting that hypothermia initiated during cardiopulmonary resuscitation (CPR), that is, intra-arrest, is superior to cooling initiated after ROSC, both in terms of increased rates of successful CPR and improved survival [8-11]. Experimental investigations have also shown that intra-arrest therapeutic hypothermia (IATH) increases the success rate of defibrillation attempts in VF [12] and has beneficial effects on heart function, including improved left ventricular function and reduced myocardial infarct size [13]. Clinical investigations have shown that pre-hospital induction of therapeutic hypothermia is feasible [14], without major adverse events even when used intra-arrest [15], and may provide some additional benefits over delayed in-hospital cooling [16].

The objective of this systematic review of the literature was, therefore, to evaluate whether IATH affects survival and neurological and cardiac function in experimental and human CA.