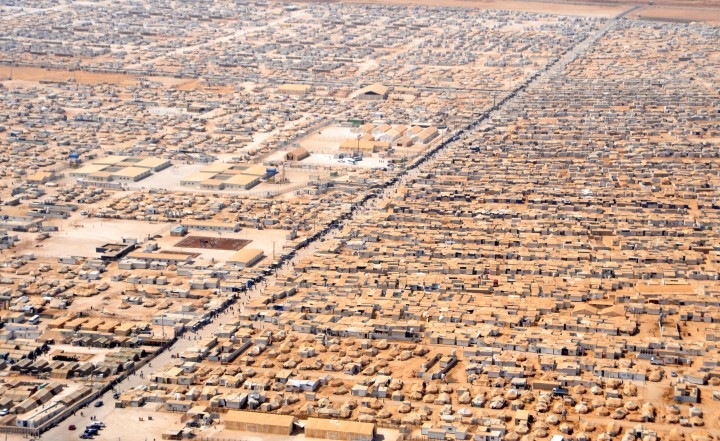 More than half the population are children, presenting challenges not just on how to provide schooling and restore abruptly halted educations in Syria, but also in investing for the future

GENEVA, July 28 (UNHCR) – As Jordan’s Za’atari camp – the largest refugee camp in the Middle East – prepared to mark its third anniversary, the UN refugee agency revealed on Tuesday (July 28) an increase in the number of refugees seeking shelter in camps across the rest of the country.

UNHCR said that living conditions for more than half a million refugees living outside of camps in the country had become increasingly tough, swelling the population of other camps. The latest survey showed 86 per cent of urban refugees live below the Jordanian poverty line of 68 JOD (approx. US$95) per capita per month.

“With Za’atari at capacity, the number of urban refugees seeking shelter in Jordan’s second camp, Azraq, increased fourfold in the first six months of this year,” UNHCR spokesperson Ariane Rummery told a press briefing in Geneva.

This trend is driven by increasing vulnerability of urban refugees in Jordan whose savings are depleted after years in exile, and who are unable to find secure legal livelihoods. Those living in Amman, in particular, are trying to survive in one of the most expensive cities in the Middle East.

Most have already seen the value of their monthly WFP food vouchers being cut in recent months and now face the prospect of losing them entirely from next month.

Za’atari camp is the largest refugee camp in the Middle East, with around 81,000 Syrian residents. The temporary settlement was established on 29 July 2012 amid huge inflows of refugees from Syria.

The camp was set up in nine days, and has grown in large stages since. Initially there were problems with electricity for lighting and for refugees to charge their mobile phones – the sole means by which they could keep in touch with families back in Syria and elsewhere.

Lines of tents that housed the first refugees to arrive in Za’atari have now been replaced by prefabricated shelters. More than half the population are children, presenting challenges not just on how to provide schooling and restore abruptly halted educations in Syria, but also in investing for the future. One in every three children is not attending school.

There are also some 9,500 young people in the camp aged between 19-24 who need skills training and, like their older counterparts, also need livelihood opportunities. Some 5.2 per cent of these were at university in Syria but had to drop out due to the conflict, while just 1.6 per cent successfully graduated.

“More opportunities must be found for this generation, and the millions of other refugees around the region in similar predicaments,” said Rummery. “They are the future of Syria.”

RESQTEC AT INTERSCHUTZ: Innovation and education for Firefighters