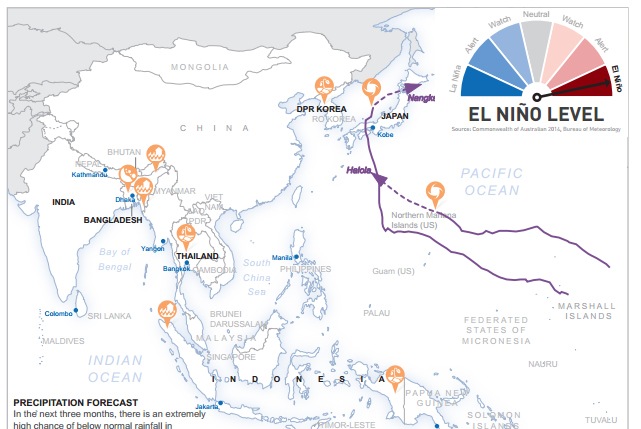 Local government is providing assistance, including 28 tonnes of food.1

Following days of heavy rain, there was flooding in Aceh Jaya District of Nanggroe Aceh Darussalam Province on 15 Jul. Over 7,900 houses were inundated and 25,750 people affected, including almost 2,300 displaced.

Floodwaters have receded. Local government provided relief assistance and the army installed a temporary bridge connecting Banda Aceh and Meulaboh, which collapsed during the flooding.2

District Authorities have opened 19 evacuation centres in Sonitpur district for almost 16,400 people. Damage to crops, livestock and infrastructure are reported in the affected districts. No casualties are reported.3

The wet season is under way however seven out of 67 provinces are contending with drought conditions, according to the National Disaster Warning Centre. Water rationing is taking place in almost a third of the country and farmers are asked to delay planting their main rice crop

There was a landslide on 18 Jul in Baijedbostami and Lalkhan Bazar in Chittagong district. Initial reports indicate seven deaths and three people seriously injured. The monsoon is predicted to bring heavy rainfall over Dhaka, Khulna, Barisal, Chittagong and Sylhet divisions with increased risk of landslides.6

Following landslides and floods caused by rainfall in late June in Cox’s Bazar, Banbardan and Chittagong a joint needs assessment (JNA) was concluded last week. Community discussions highlighted food, restoration of livelihood and repair of damaged homes as the top priorities. The Humanitarian Coordination Task Team will meet on 20 Jul to discuss the JNA findings and recommendations.7 until Aug.4

Drought conditions persist with North and South Hwanghae, South Hamgyong and South Pyongan Provinces the worst affected. On 15 Jul, the Public Distribution System (PDS) ration was reportedly reduced to 250gm per person per day, down from 310gm in early Jul and 410gm in Jun. The further reduction in PDS rations one month earlier than last year, raises concerns about losses to the early harvest, the results of which are due later this month

from ReliefWeb Headlines http://bit.ly/1CRCb40
via IFTTT