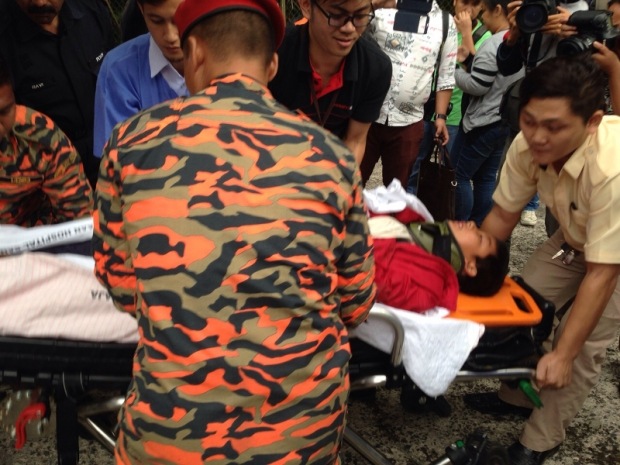 KUNDASANG, June 7 — Fighting allegations of disorganised emergency response, the Sabah Fire and Rescue Department today insisted adverse weather and others risks were among reasons helicopters were not used to remove climbers stranded on Mount Kinabalu.

Department director Nordin Pauzi said visibility was not the sole consideration for dispatching the helicopters, but many factors that contributed to them not being used to rescue climbers trapped after Friday’s quake.

“We have to take into consideration a lot of factors. Fogs are a factor, and although helicopters may have sophisticated instruments to enable them to fly with low visibility but landing a helicopter on a mountain, with no control tower requires the pilots to land based on their own vision,” he said.

He said another issue that heavily influenced the decision was the cross winds in the mountain.

“Winds are unpredictable and strong up there and during landing, it can cause the helicopter to swerve and hit the mountain face.

“I was up on the helicopters as they tried approaching Laban Rata to bring the bodies down and I can tell you that it is not easy to fly a helicopter up there,” said Pauzi when speaking to reporters at Sabah Parks headquarters here.

He also dismissed critics who have lambasted search and rescue personnel over photos of them idling at Timpohon Gate.

“Those photos of us resting do not tell the whole story. We all had to take turns to rest and everyone had a role to play.

“To say that we did not do anything is an injustice to the men who also risked their lives climbing up the mountain despite the tremors and falling rocks to search and rescue those who were stranded,” he said.

“Being recognised as a hero is not a priority. The priority is to save lives and everyone played a part in bringing the climbers and the bodies down the mountain. Everyone did their jobs. The mountain guides did theirs and we did ours,” he said.

He also said it was the mountain guides duty to ensure the climbers made it off the mountain, amid glowing tributes for the native guides, including one who succumbed to his injuries on the first day.

He said that evacuation involved several agencies including his, the Royal Malaysian Police, the Armed Forces, and the Special Malaysia Disaster Assistance and Rescue Team (SMART).

“It takes time to coordinate a SAR operation. We had to study every possibility and eventuality. In the case of Mount Kinabalu, we had to take into consideration that tremors were still felt and rocks and boulders were still falling off the mountain.

“That is why the mountain guides have the first responsibility of evacuating the climbers. After all, they know the mountain best,” he added.

He added that once down the mountain, the mountain guides would hand over the climbers especially those injured to the authorities waiting on the ground as they are prepared to treat the climbers if they need any treatment.

Today, an Australian trekker who was among those who made it off the mountain safely had lashed out at Malaysia’s emergency response, calling it a “farce”.

In an interview with Australia’s ABC News, Vee Jin Dumlao alleged of shambolic organisation by local rescuers, whom she said idled and ate food meant for victims while the native guides – the “unsung heroes” – did most of the rescuing.

She also claimed that some of those who died might have been saved if the rescue helicopters had been sent when weather cleared up on Friday evening.

The death toll from the quake that hit Sabah on Friday morning is now at 13, while six more people remain missing.

How Liberia got zero cases of Ebola