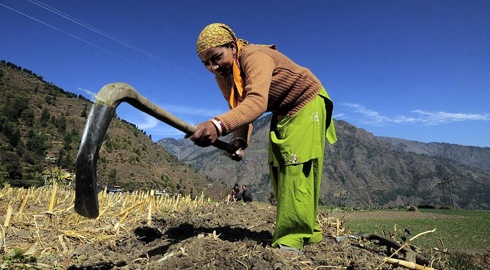 Towards a better understanding of food security, gender equality and peace-building

IDS and FAO want to understand how addressing the specific priorities of men and women in food and nutrition interventions could shape conflict mitigation and prevention, and peace-building.

The Institute of Development Studies and the FAO are launching this online discussion focusing on food security, gender equality and peace-building. We would like to better understand the links between food security, gender equality, and violent conflicts, and subsequent peace-building processes. We want to understand how addressing the specific priorities of men and women (across different socio-economic, cultural and age groups) in food and nutrition interventions could shape conflict mitigation and prevention, and peace-building. There are currently fairly large bodies of literature on key issues that underlie these topics. However, very little is known about what links them together.

We want to bring together these different strands of literature and knowledge in order to think about potential interactions between food security, gender equality and peace-building, and identify entry points for policy interventions that support food security and build resilience among men and women in conflict-affected contexts in ways that promote greater gender equality and sustainable peace.
One of the most important outcomes emphasized in the literature is the negative impact of violent conflict on food security and subsequent nutrition – as a result of the breakdown of the economy, provision of basic services, and infrastructure, as well as increases in food prices and shortages.

Some of these effects may be irreversible throughout the lifetime of those affected, especially if the effects happened during childhood. Increases in food prices and food insecurity can feed perceptions of deprivation, marginalization and exclusion that may aggravate existing grievances. When grievances are formed along ethnic, religious or other forms of social cleavages, the potential for civil unrest and protests may increase to sufficient high levels as to cause violent conflict. Food insecurity may also favour individuals participating in, joining or supporting armed factions, thereby increasing the feasibility of armed conflict. Global uncertainties affecting food security outcomes, such as climate change and commodity price fluctuations, may also affect conflicts across borders and between groups that depend on agriculture or trade in specific commodities for their survival.

We also know that violent conflicts have specific gender-differentiated effects. Notably, conflicts result in a change in the customary gender divisions of labor. The lives of women in contexts of violent conflict adjust dramatically in response to changes in their households and their communities, as well as a direct response to fighting and violence. Most conflict-affected countries (or areas within countries) experience significant increases in female participation in labor markets. This is a result of two factors. One is the increase in the number of women-headed households due to the death and disappearance of male workers. The second is the fact that income generating opportunities men relied on before the conflict (such as land, animals and other assets) may be no longer available.

Despite increases in female labor market participation in conflict-affected areas, women are particularly active in low skilled jobs and in the informal sector, and tend to lose their jobs once the conflict is over, especially in the organized formal sector. Women- and widow-headed households also face many social and economic constraints, such as the lack of property rights over the land of parents or dead husbands. As a consequence, rises in female labor market participation may not necessarily result in improved levels of household welfare or food security. However, interventions that build on positive social transformations during conflict could potentially improve the economic security of conflict-affected women and their families in the aftermath of conflicts. These issues remain however under-researched.

Finally, a number of studies have noted the role of women in peace-building. This body of work has driven renewed policy efforts to further involve women in peace and economic processes in post-conflict contexts. The role of the United Nations has been instrumental in this process, particularly through Security Council Resolution 1325 issued in 2000. UNSCR 1325 includes among its main goals the need to address women and girls’ specific needs, and to reinforce women’s capacities to act as agents in relief and recovery processes, in conflict and post-conflict situations. Subsequent Resolutions, and the Secretary-General report on Women and Peacebuilding in 2010, highlighted the role of women as key actors in economic recovery, social cohesion and political legitimacy. There is a considerable lack of systematic and rigorous evidence on the benefits of including women in economic recovery and peace-building processes, there is plenty of anecdotal evidence that women play important roles as peace-makers during and in the aftermath of violent conflicts. New evidence discussed above has also shown that women participate more actively in labor markets during conflict, and that in some circumstances and against all odds, women contribute significantly to the economic recovery of their households and communities as well as to maintaining and promoting peace in their communities.

The results of this online discussion will help inform a study aimed at generating evidence-based, meaningful, and actionable recommendations to governments and other stakeholders, particularly international organizations and FAO staff, on the nexus between support to food and nutrition security and building resilient livelihoods, peace processes and stability, and how to integrate gender issues into appropriate policies and actions related to food and nutrition security in situations where conflict exists, has recently ceased, or is likely to reoccur.

Question 1: Are you aware of any work, projects, programmes or policies that address the issues of food security, gender equality and peace-building, and the links between them? Would you be willing to share it with us, to help better inform this research?

Question 2: Could addressing the different food security and nutrition priorities of women and men, girls and boys help prevent the onset of violent conflict, or shorten its duration? How could this be best achieved? Please provide details of any existing work that addresses these issues.

Question 3: Does your organization have experience of post-conflict contexts where women and men, through their roles in agriculture and food and nutrition security, would have contributed to preventing conflict or shortening its duration? What were these roles and how did they contribute?

from ReliefWeb Headlines http://bit.ly/1LmJX95
via IFTTT

Falck supports and sponsors the EMS 2016 Congress in Copenhagen

Food distribution by ICRC in Somalia