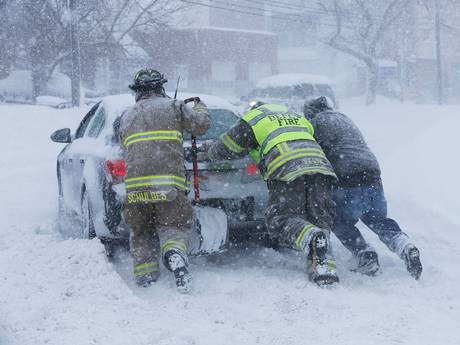 THE INDIPENDENT – Five people have been killed and a state of emergency declared after a towering “wall of snow” buried parts of western New York yesterday. The fifth death was reported today after the body of a 46-year-old man was found in a car in Erie County, which includes Buffalo.

County officials confirmed yesterday that there had been four snow storm-related deaths. One of the four people was killed in a traffic accident and the three others died after suffering heart problems, two of whom were believed to have been shoveling heavy snow at the time.

At least another two people are believed to have died in car accidents caused by icy conditions and decreased visibility on the roads in New Hampshire and Michigan over the past week.

The arctic storm, which is expected to get worse tomorrow, has plunged nearly half of the US into temperatures well below freezing.

New York state has been one of the hardest hit areas, and was covered in up to six feet of snow leaving many people stranded amid the bitterly-cold weather chaos. A driving ban was enforced in some areas.

Firefighters were also spotted carrying a patient 10 blocks down the street to Mercy Hospital in South Buffalo as the blanket of snow was too thick and high to drive through.

The record-low temperatures are said to be characteristic of January rather than November and are the coldest for this time of year since 1976, according to Weather Bell Analytics, a meteorologist consulting firm.

Snow is reported to have fallen at a rate of up to five inches (13 cm) an hour and some areas approached the US record for 24-hour snowfall totals of 76 inches (193 cm).

“This storm may persist until Friday morning with the potential for another two feet of snow” Cuomo said in a statement.

“New Yorkers in these areas should exercise extreme caution, and stay off the roads until conditions are clearer and safer.”

States bordering the Great Lakes such as North Dakota, Minnesota, Wisconsin, Michigan, Ohio and Pennsylvania were also hit with chilling temperatures as low as -11 degrees Celsius during the night.

The state has employed the use of 526 ploughs, 74 large loaders and about two-dozen large snow blowers to shift the wall of snow blocking the doors and driveways of people’s homes.

Parts of Erie County, western New York, had 60 inches (1.5m) of snow, with more expected to fall over today and tomorrow, said Steven Welch of the National Weather Service near Buffalo.

Concerned residents whose week has been blighted by sub-zero temperatures and disruptions posted their thoughts and pictures on social media.

Why do so many people die shovelling snow?