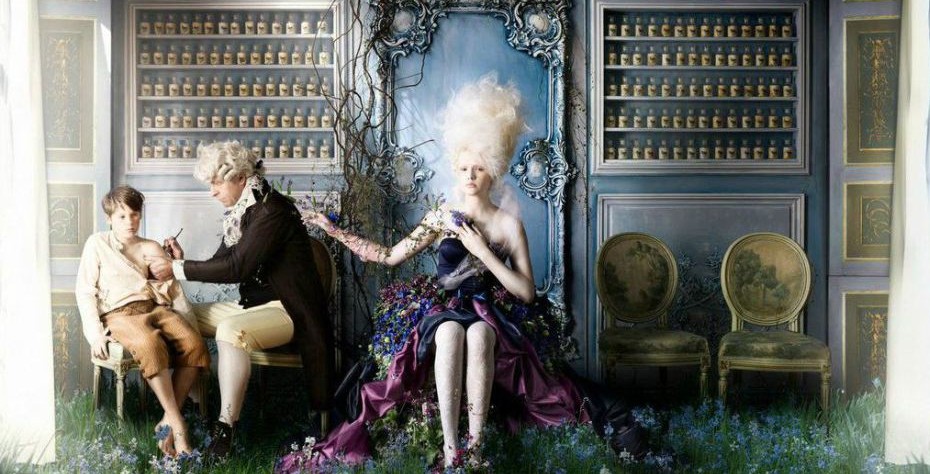 At first glance, the image above looks like it comes from a spread in Vogue magazine. Shot by Australian photographer Alexia Sinclair, it certainly has all the elements of a high-gloss fashion magazine photo shoot: gorgeous styling, moody lighting, a beautiful model, something odd going on in the background.

It is in the background, however, that the purpose of the image reveals itself. Off to the side, that’s Dr. Edward Jenner inoculating James Phipps, the first person to receive the smallpox vaccine, in 1796. Less than 200 years later, in 1980, the World Health Organisation declared that smallpox was eradicated. (The woman in the foreground of the photograph alludes to the indiscriminate nature with which disease infects rich and poor alike.)

The work, which celebrates vaccination, is part of a series by artists commissioned by the Gates Foundation, a philanthropic organisation headed by Bill and Melinda Gates, ahead of a meeting of heads of state in Berlin at the end of this month.

There is a second, perhaps unintended message in Sinclair’s work. Just as the inoculation is relegated to the background of the photo, so too is is it relegated to the back of our minds, especially in the western world. Immunization works. Polio has almost been eradicated. Measles deaths dropped 75% between 2000 and 2013. Four decades ago, some 20 million children died before they could reach their fifth birthday, according to Christopher Elias, who runs the global development program at the Gates Foundation. Today that number stands at 6 million.

But the global immunization push has in a way been a victim of its own success. “When you see a 70% reduction in measles over the last decade, it’s easy to think measles is not a problem anymore,” Elias tells Quartz. “People forget that it’s because we’ve been working hard to get vaccines out there. It’s easy to forget that these are diseases that used to kill and maim children in the west as well.”

To remind people, especially western donors, about the importance and effectiveness of vaccines, the Gates Foundation commissioned over three dozen works of art from artists, writers, and filmmakers from across the globe. The pieces can be seen online under the rubric “The Art of Saving a Life.” The hope is that the art will inspire people to think about the role of vaccines in modern health systems, and the tremendous value for money they provide by cheaply preventing disease rather than expensively having to cure it.

Some of the work will also be shown at a private event in Berlin on Jan. 27, hosted by German chancellor Angela Merkel. Organised by the Gavi Alliance for vaccines, the event is centred around getting donors to pledge $7.5 billion for vaccinations between 2016 and 2020. The Alliance reckons that this amount will save between 5 and 6 million lives in the poor world.

798 new ambulances enter into service for the Turkish 112 EMS