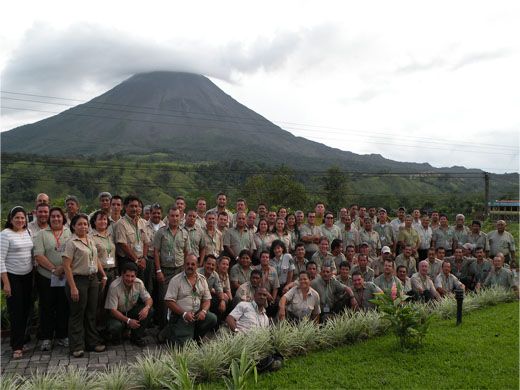 World Ranger Day commemorates rangers killed or injured in the line of duty, and celebrates the work rangers do to protect the world’s natural and cultural treasures.

World Ranger Day is observed annually on the 31st of July, and is promoted by the 63 member associations of the International Ranger Federation, by our partner the Thin Green Line Foundation, and by individuals who support the work of Rangers and the IRF.

The first World Ranger Day was observed in 2007 on the 15th anniversary of the founding of the IRF.

Here below we report the main contents of the Thin Green Line Foundation’s Cover Letter written by its Director and also President of the International Ranger Federation, Sean Willmore.

Recently  rangers were  also  honoured  and  highlighted  at  the  IUCN  World  Parks  Congress  with  over  280  rangers  representing  50  +  countries.  This  included: an  International  Ranger  Station  that  became  a  focal  point  for  many; key  note  addresses; and  a  heartfelt  closing  ceremony  recognizing  rangers  who’s  lives  were  lost  as  well as  celebrating  our deserving  and  inspirational  award  winners.  We  thank  our  partners  IUCN, Parks  Victoria  and  Patagonia  for  making  this  possible.
The  rangers  are  also  self-­mobilizing,  many  with  support  of  their  organisations,  with  new ranger  associations  being  formed  and  joining  the  IRF,  and  with many  more  to  come  on  line.  We  have, ourselves, also  been  able  to  support  more  than  25  ranger  projects  in  17  countries  and  6  continents,  and  we  are  pleased  to  see  a  great  deal  more  government  leaders  and  NGO’s  increasing  their  support  for  rangers  on  the  front.
We  also  encourage  all  of  you  to  participate  on  World Ranger  Day.  You  can  download  your E-Kit  at
http://www.internationalrangers.org/world-­ranger-day/ or, http://www.thingreenline.org.au “