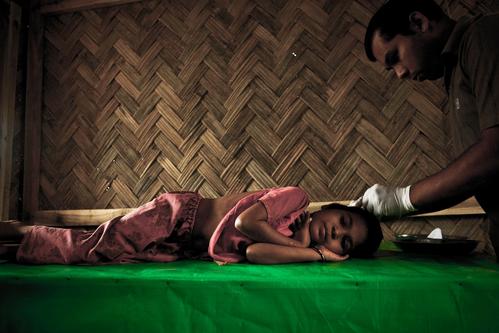 Diphtheria, a disease long forgotten in most parts of the world thanks to increasing rates of vaccination, is re-emerging in Bangladesh, where more than 655,000 Rohingya have sought refuge since 25 August, following increased violence in Myanmar. As of 21 December, Médecins Sans Frontières (MSF) has seen more than 2,000 suspected cases in its health facilities and the number is rising daily. The majority of patients are between five and 14 years old.

“I was very surprised when I got that first call from the doctor at the clinic telling me that he had a suspected case of diphtheria,” says Crystal Crystal VanLeeuwen, MSF emergency medical coordinator for Bangladesh.

“‘Diphtheria?’ I asked, ‘Are you sure?’ When working in a refugee setting you always have your eyes open for infectious, vaccine-preventable diseases such as tetanus, measles and polio, but diphtheria was not something that was on my radar.”

Diphtheria is a contagious bacterial infection that often causes the buildup of sticky grey-white membrane in the throat or nose. The infection is known to cause airway obstruction and damage to the heart and nervous system.  The fatality rate increases without the diphtheria antitoxin (DAT). With global shortages of DAT and the limited quantity that arrived in Bangladesh just over a week ago, the likelihood of a public health emergency looms, threatening a population that has fled the threat of violence and is now faced with another: the outbreak of disease.

If patients don’t receive DAT early on in the progression of their illness, the toxin continues to circulate in the body. This can cause damage to the nervous, cardiac and renal systems weeks after the initial recovery period.

“The first suspected case we identified was a woman around 30 years old,” explains VanLeeuwen. “She came to our health facility in early November and we treated her with antibiotics. She left the clinic, only to return to us over five weeks later. Then she had numbness in her arms, could barely stand or walk and had difficulty swallowing. It is too late to give her DAT at this stage.”

As of today, there are only less than 5,000 vials of DAT globally. “There is not enough of the medication to treat all of the people in front of you who need it and we are forced to make extremely difficult decisions,” says VanLeeuwen.  “It becomes an ethical and equity question.”

The emergence and the spread of diphtheria show how vulnerable Rohingya refugees are. The majority of them are not vaccinated against any diseases, as they had very limited access to routine healthcare, including vaccinations, back in Myanmar. Diphtheria is transmitted by droplets and spreads easily in the refugee settlements where people live in overcrowded conditions, with shelters squeezed up against each other and sometimes families with up to 10 people living in one very small space.

MSF has responded to the rapid spread of diphtheria by converting one of its mother and child inpatient facilities in Balukhali makeshift settlement, and the inpatient facility near Moynarghona – which was only days away from opening – into a diphtheria treatment centre.

Alongside this, MSF has set up a treatment centre in Rubber Garden, which was previously a transit centre for new arrivals. The total bed capacity will grow to 415 beds by 25 December. To prevent the further spread of the disease, our teams are also doing tracing and treatment of people who might have come in contact with the disease in the community. As soon as a case is identified, a team visits the family, gives them antibiotics and searches the area for additional cases for referral and treatment.

To contain the spread of the diseases, the most important measure is to ensure vaccination coverage in the shortest possible time. The Ministry of Health and Family Welfare, with the support of other entities, has just started a mass vaccination campaign, which MSF has been supporting by setting up fixed points in our health posts.

But the challenges remain.

An unvaccinated person gains immunity after a minimum of two vaccines, administered four weeks apart. This is a population that knows little or nothing about the benefit of vaccines. Less than a month ago, the Rohingya already participated in a mass measles vaccination campaign. Many do not understand why they need another vaccine.  Communication with the population is key to ensuring good vaccination coverage. MSF is also trying to ensure all newly arrived refugees are vaccinated before they are relocated into the camps. But given the time required to complete the course of vaccination, and in the absence of a place where they can be temporally sheltered, it’s a big challenge.

As a medical humanitarian organisation, we also face a dilemma.

“Even before the diphtheria, there was a severe lack of inpatient bed capacity. Now we have had to convert those scarcely available beds into dedicated treatment and isolation areas for diphtheria patients only,” says Crystal VanLeeuwen.

“The women and children who previously had access to the facility no longer have this as an option. This is also creating a strain on the space and staffing available in non-diphtheria inpatient facilities that have taken on these patients. The teams have been adapting to the rapidly changing situation but we all face new challenges each day.”

“These diphtheria cases come on top of an ongoing outbreak of measles and the huge load of general and emergency health needs of this many people,” says Pavlos Kolovos, MSF head of mission for Bangladesh.

“They are already vulnerable, coming with almost no vaccination coverage. Now they are living in an extremely densely populated camp, with poor water and hygiene conditions. Until those problems are addressed and improved, we will continue to face further disease outbreaks and not just of diphtheria.”