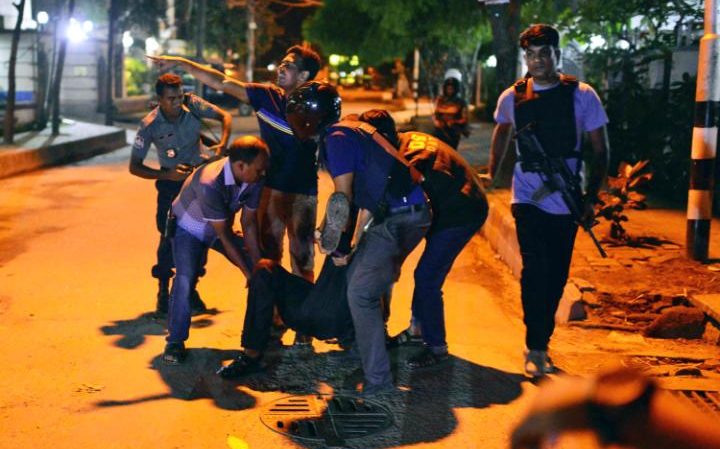 An injured man is taken away from the scene in Dhaka. CREDIT: AP

Bangladesh – Seven men armed with guns, blades and bombs bursted into the Holey Artisan Bakery in Dhaka, capital of Bangladesh, on July 1, at 8:30 pm. Another Isil terrorist attack aimed to kill people who were not suppose to be converted to Islam.

Killers aimed in particular at foreigners. Victims are Italian, American, Japanese, Indian and among them, there are also two Bangladeshis.

Survivors told to police, that terrorists ordered to hostages to recite some verses of the Koran. the ones who did it, had been spared, but the ones who could not, had been brutally tortured and killed.

Isil claimed responsibility for the attack, saying it had deliberately targeted the citizens of “Crusader countries”. However, it is still not clear if the plot was organised by the group’s leadership in Syria or developed locally in Bangladesh.

On Friday night, before the attack, some people were out of the restaurant in order to speak with friends or to answer the phone. When terrorists striked, they managed to alert police forces and rescuers, who suddenly arrived at the restaurant, starting the fight.

Six terrorists were killed and one other arrested. They left 20 bloody and innocent victims on the ground of the restaurant.

The breakdown of victims:

“All of Italy is united in crying for our countrymen killed in Dhaka. Our values are stronger than hatred and terror.”