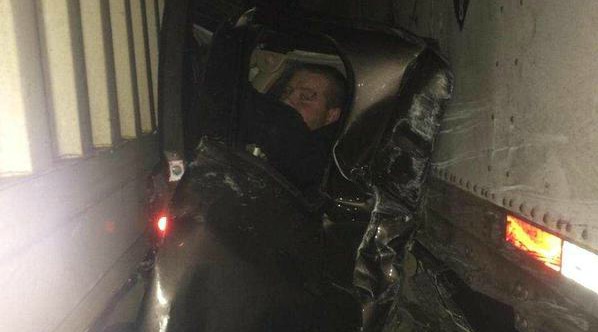 Look this photo: he lived!

One man who miraculously survived an Oregon car crash on Saturday can’t look at the dramatic photograph taken of him pinned between two semi-trailers for too long.
“If I look at it, it scares me,” Kaleb Whitby, who works in sales for his family farm, tells PEOPLE. “My mind starts to go elsewhere.”
Whitby, from Kennewick, Washington, woke up at 5 a.m. that morning to travel to Council, Idaho, for business.
“It was dark, cold and very foggy,” as he began the trip in his pickup truck, driving slowly and carefully without passing anyone. “It was only getting worse and I noticed that the truck in front of me was starting to sway.”
Before Whitby, 27, could react, he hit the back end of the trailer, flipping his truck around.
“The passenger side of my car was facing oncoming traffic,” he recalls. “I put my head back, started to pray, closed my eyes and just gripped my hands as hard as I could on the wheel.”
A second trailer soon came along, hitting his car and causing the end result: Whitby’s four-door pickup was wedged between two semis.
“I was so close to both trucks that I could touch them at the same time,” he tells PEOPLE. “It was pretty unreal.”
More than 100 people were involved in the pileup, about 33 miles east of Baker City, according to The Oregonian.
At least three separate collisions involving more than 20 vehicles, most of them semi-trucks, injured a dozen people, the paper reports.

Moving Forward
Whitby knows he is lucky.
“There wasn’t anything I did that let me survive. I know that I was somehow protected,” he says. “After all of the bagging, clanging and crushing stopped, I knew I was going to be okay.”
Although Whitby doesn’t think he’s responsible for walking away from the scene alive, his friends are not surprised he survived.
“If anybody comes out of that, it’s a guy like Kaleb,” his former weightlifting coach Don McCauley tells PEOPLE. “He knows what to do in an emergency. Just one of those people that’s a little different than everybody else.”
Another friend of Whitby’s feels the same way.
“He’s the toughest man I’ve ever known,” adds pal Sean Rigsby. “Kaleb taught me a lot about being a better person.”
Miraculously, Whitby managed to walk away with only a bruised eye and a few tiny cuts on his hand.
“I just had to put a couple Band-Aids on my right ring finger,” he says. “I’m totally fine.”

New Priorities
With the accident in the past, Whitby is looking at his future in a new light – and cherishing family time with his expectant wife Camille, 24, and their 2-year-old son Mason.
“I am making sure that I spend more time with my wife and son,” Whitby, who will welcome his second child in June, tells PEOPLE. “I am praying more often for things that I am grateful for. It’s all about being thankful for everything that I do have and recognizing that all of it can be taken away at any time.”