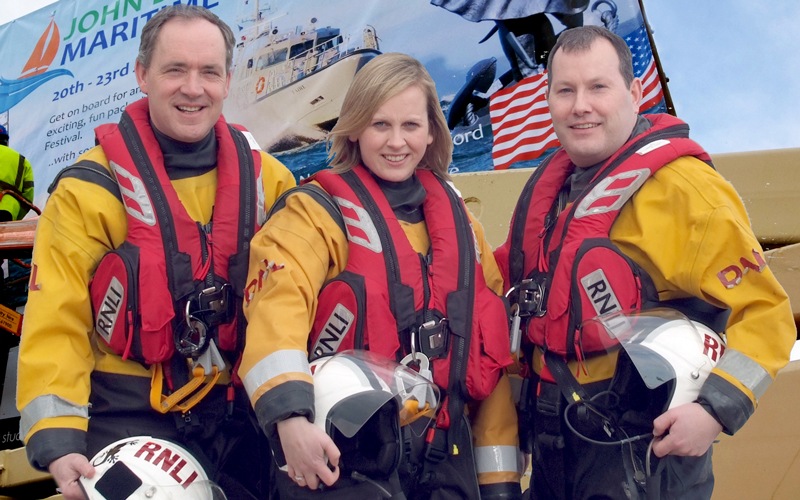 The Guardian publish on december, 13th, an interestin article from Sarah Smith. What inspire volunteer life-savers?

If you feel wonderful to help people

The first story comes from Lorraine Galvin, 34. She lives in Wexford, Ireland, with her four-year-old daughter. A university lecturer in digital media, she is a helm with Wexford Royal National Lifeboat Institution, with whom she has volunteered for 15 years.

When I was 17, our rowing club sent me and four friends out into Wexford harbour early one March evening. With no life jackets, flares or communication devices, we were badly equipped, in an old-fashioned wooden boat. The waves kept tipping us and eventually, an hour in and a mile and a half out, we capsized. I was a strong swimmer, but too shocked to attempt more than a few strokes. We didn’t know what to do, so we just clung on to the vessel. I didn’t think we were going to make it. I was expecting a wave to take us at any moment.

We ended up lying on top of the boat and kicking our legs for two and a half hours until we reached safety. Thankfully the strong tide had turned, otherwise we’d have been swept into the Irish Sea.

Realising, so young, that you are mortal is an awful sensation. I struggled to come to terms with the trauma. The intense feeling that there had been no one there to save us stayed with me. That’s why I joined the Wexford lifeboat rescue when it was established a year later.

My most dramatic rescue was one October night when I went out in pounding rain and a force 9 gale to rescue a man who had been blown into the harbour from his small boat. Our inflatable lifeboat was getting hammered by constant waves and filling up with water, but by the light of a helicopter we managed to find him.

I received an award for saving the lives of three men whose boat was stranded on a sandbank and being wrecked by two-and-a-half-metre surf bumping down. It feels wonderful to help people. There’s no greater sense of achievement than working as a team of three, saving lives. The crew – all volunteers – are like a family, working closely together and relying on each other for survival.

We get called out at least once a month. It can be boats breaking down, swimmers in trouble or bridge jumpers. When my pager goes off, I’ll abandon my class, as it’s agreed we will be in the water within 10 minutes.

The night before my hen weekend, I was up in the early hours with a bridge jumper. He entered the water and didn’t want to be saved, so we had to hold on to him in the water, with the crew in the boat, talking to him to calm him down, until he became too tired to struggle. Only then could we lift him into the boat. It’s hard to go back to sleep after: there is so much adrenaline.

I’m separated from my partner and have a young child, so these days I can’t always go out at night. When she hears my pager go off, she always says, “Quick, quick, Mummy – someone needs to be saved.” When I had her, I did think twice about volunteering, but my training means I’m confident – there’s always a sense of calm in the lifeboat because we train so much.

I’m constantly aware of the power of the sea and have a deep respect for it. It is something nobody can control; you can only prepare for it. The lifeboat feels a natural place for me.

READ THE OTHER STORIES ON THE GUARDIAN