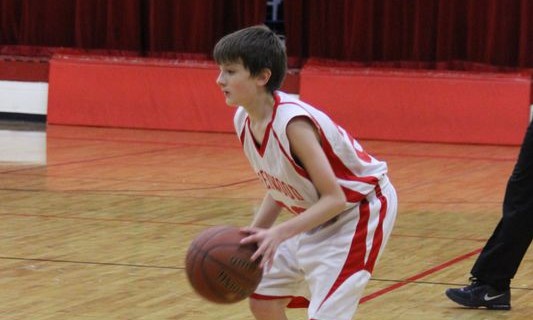 LOYAL — A 13-year-old Greenwood boy, Bailey Venet, is alive thanks to the help of good Samaritans from Granton, Greenwood and Loyal who rushed to resuscitate him after he collapsed on the Loyal High School basketball court Dec. 6.

“It was the fourth quarter of the tournament game, and there was a stop in play, … I think there was a foul or something, and the refs blew the whistle and stopped the play, … and he collapsed,” said Andy Dean of Granton, who was coaching the opposing team of Granton middle school boys.

Andy Dean, a former emergency medical technician, and his wife, Sara, a nurse at Ministry Saint Joseph’s Hospital in Marshfield, were the first people at Bailey’s side. They immediately started performing CPR.

“I could tell it wasn’t a trip, because he didn’t put his hands down to catch himself,” Sara Dean said. “I knew I had to get down there and help that little guy.”

While the Deans were performing CPR, others cleared the athletes from the gym, and someone ran for the automated external defibrillator, or AED. Troy Thomas and Dean Bogdonovich of Greenwood and Bob Wilke of Loyal also assisted in resuscitating the boy.

One shock from the device restarted Bailey’s heart, and he was alert by the time an ambulance arrived on the scene.

“It was a very good feeling to see him start blinking his eyes,” Andy Dean said.

Bailey’s father, Eric Venet, said he doesn’t remember much about the 11 minutes between the time his son collapsed and an ambulance arrived on the scene, but it felt like an eternity.

“I had tunnel vision,” he said. “I don’t really remember anything, but time seemed to slow down.”

For the Deans, those 11 minutes felt like a few seconds.

Eric Venet said his son later told him his vision got blurry and he developed a headache just before he collapsed, and the next thing he remembered was seeing the EMTs who transported him to Saint Joseph’s Hospital.

An echocardiogram revealed Bailey has a condition called restrictive cardiomyopathy, which caused his heart to stop during the game.

“This is the first time it’s ever been present, and he’s been playing ball since fifth grade,” Eric Venet said. “On physicals and stuff, you can’t detect it. Listening to his heart, it sounded fine.”

Although he was up and walking around at Saint Joseph’s Hospital a few days after he collapsed, Bailey underwent further treatment at Children’s Hospital of Wisconsin in Milwaukee, where he had an internal defibrillator placed in his chest.

Bailey is recovering at home and hopes to play basketball again in the future.

Eric Venet said the device will restart Bailey’s heart if the condition causes him to collapse again and no one is around, but he believes God put the right people in the right place on Dec. 6.

“If it wasn’t for those people, Bailey wouldn’t be here right now,” he said.

A ceremony honoring those who took action to help Bailey will take place Dec. 23 at Loyal High School during halftime of the varsity boys basketball game against Greenwood.

Reporter Marisa Cuellar can be reached at 715-384-3131. Find her on Twitter as @cuellm34. Ceremony honoring Bailey Venet’s heroes

The 1milion dollar's drone is the Gimball project

How do you check the L5 medial hamstring reflex?