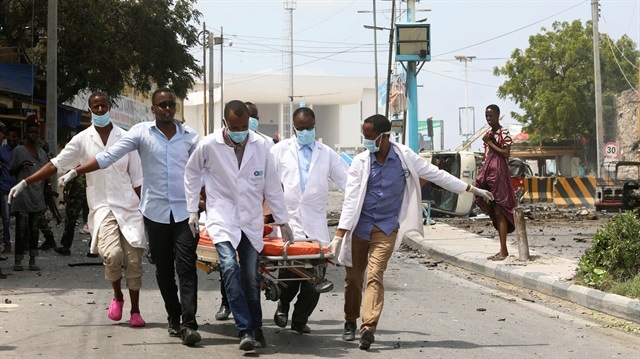 A humanitarian mission put at risk because of armed groups. Especially emergency medical operations like an evacuation become dangerous. The #AMBULANCE! community started in 2016 analyzing some cases. This is a #Crimefriday story to learn better how to save your body, your team and your ambulance from a "bad day in the office"!

A humanitarian mission put at risk because of armed groups. Especially emergency medical operations like an evacuation become dangerous. The #AMBULANCE! community started in 2016 analyzing some cases. This is a #Crimefriday story to learn better how to save your body, your team and your ambulance from a “bad day in the office”!

The protagonist of this case study is a logistician in emergency response and he worked for 10 years in conflict areas. He is more specialized in working with IDPs and refugee assistance in term of logistics management and coordination with other UN Organizations and partners to facilitate the smooth access of relief items to beneficiaries in camps.

He usually is involved in activities that need surveys and assessments about the target beneficiaries in some remote areas, in coordination with other organizations to ensure the accessibility of humanitarian assistance for the camps target population.

At the time of the case study, he is working in Darfur (Sudan), where armed groups made the area unsafe and unpredictable. Security there was unstable and there were frequently reported incidents of attack from armed troops. Medical evacuation in such condition becomes difficult.

THE CASE – This evacuation procedure had extremely bad consequences on the working team for the violence and side effect such as interruption to the conduct of humanitarian work in the incident area.

The facts of this case study can be broken down as follow based on the incident scenario. The incident took place in staff accommodation in one of the small towns in Darfur region, where we were on an inter-agency mission for conducting surveys and assessments for Refugees and IDPs Camps located inside & outskirt of this remote area.

It is early morning around 07:00 O’clock on 17 Oct, 2008, when staff accommodation has been attacked by an armed group. Prior to this incident, there was no sign of security reaction or any reported incidents in the area for so long time, especially during when the team made broadcasting and preparation for beneficiaries and Local Committees to be ready for the surveys and assessments mission.

The armed group shot one of the Security Guards and rushed inside the accommodation. They also shot two staff members, one was seriously injured at his back and another other got a shot in his arm. They kept other staff under threatening, and they refused to accept any negotiation.

Moreover, they damaged all accommodation furniture and burned all the documents for the Surveys and assessments mission. They start then looking for money of the inter-agency mission facilitation.

The injured people situation got even worse and serious. Other staff members were still under threat and some lost consciousness. The occupied place was full of panic and fear. There was no way out to make any struggle or to refuse armed group instructions because they were very aggressive and in bad temper manner. We were afraid this situation could cause more victims.

This situation took around one hour, after that, I succeed without attracting the armed group attention, to send a message from my phone to the organizations base ( I kept this phone inside my internal clothes when they first attacked the accommodation ). On the other hand, at the time the armed group attacked the accommodation, one of the security guards succeeded to escape and informed the local authorities about the incident.

The organization base made immediate response and coordination with other partners and sent medical evacuation team in acceptable time to evacuate high-risk injured staff and make necessary medical action for others who also affected by the incident ( psychological trauma).

The situation was put under control; I can say that with minimum risk for individuals, as the safety of staff is a high priority more than money or property, afterwards. We were forced to cancel the mission for more security and staff safety assessment, so as to manage like such incidents with more precaution measurements.

All the mission team were well – trained on how to use first aid kits and the procedures of medical evacuation in Emergency and Violence situations.

ANALYSIS – The analysis points for the incident situation can be illustrated as follows:
The incident happened because the armed group want to loot the money and provoke the collapse of the mission purpose. The security situation in all the region was predictable, but the incident area did not report like such incident before, so it was an obvious indicator that the incident main cause for robbery and to stop the work of the inter-agency mission.

We discovered later from the local community who corporate fully with us during the incident that the armed group did not belong to the area surrounding. The accommodation or targeted camps for surveys and assessments, but they may probably come from other areas, where other beneficiaries still waiting for the coming rotation mission to conduct like such work, may be based on their concepts of local culture it was response message from them or there was negligence from organizations for them, why these areas not covered yet in the mission purpose for providing facilities, without putting in their consideration the work plan for the field mission, or the sequences of like such violence incidents for humanitarian aid staff and the local community support .

I tried to mitigate the risk of the armed group to reduce the incident victims, by not making them more aggressive.  We followed their instructions, as there were no more options available on hand at that critical time to save staff lives and send quick a distress call.

The most difficult dilemmas I faced was how to rescue the injured staff, keep the other staff safe from expected shooting from the armed group and how to send a distress call to the organization and local authority.
The mission plan was well prepared for like such incidents, we arranged with local security and community, also the mission was supported with medical staff for unexpected situations and the organization makes readiness emergency evacuation team.

The back history record of security situation did not show any reported violent incidents in recent time prior to the mission scheduled bases on security surveys conducted. We tried as well as possible to follow the operating procedure and follow the approved plan for how to conduct the work in the field and emergency plan for evacuation. If the situation was not stable, most of the mission staff are well trained to face like such incidents.

The conduct of personnel during the incident was extremely limited due to the surrounding circumstances and high load of violence of the incident. But we tried as well as possible to keep calm and follow the organization code of conduct and guidance of behaviour and not to make the armed group behaved more aggressive.

The responder or medical assistance and evacuation team responded effectively for the incident, as they make the necessary action, once the main risk of the armed group cleared and no obstacles to interrupt the access of the medical emergency service for those who affected by the accident.

The organization and other concern parties were updated all the time, since the first steps of the armed group attack for the staff accommodation up to the risk clearance and incident victim’s rescue, and shared channel open for this incident to ensure information update and facilitation of medical evacuation.

All the staff who tasked for field operations and ambulance personnel were well trained and have passed the Basic Security in The Field – Staff Safety and Safe and Secure Approach in Field Environments (SSAFE). In these training, the humanitarian aid worker and ambulance crews are equipped with technical information regarding their rights and responsibilities, security assessments, situational awareness, and procedures related to the passing of checkpoints and roadblocks and how to make proper communication in hard times.

The incident surround condition, causes some delay for the pre-hospital services access, as the armed group refused to let the medical staff make the first necessary action for those who injured, also the medical evacuation team need to wait until the risk of armed group was released by the concern authorities, all these factors created accumulated negative perceptible damage on the affected people by the incident in term of pre-hospital service delay and its side effects for them later.

The incident raised a lot of questions, regarding the facilitation of pre-hospital service for the remote areas in like such violence situations, with more concentration of how to make adequate access to the service from nearest points and how to equipped the local community with important knowledge and tools to strengthen their capacity to face these dilemmas properly.

Also the issue of coordination efforts among organization who have staff working in deep field safety and expected complaints from the security and pre-hospital working staff (focal points) who in charge of a first hot line for violence action immediate response.

The issue is extended to local community roles in these critical cases, especially those who in direct contact with humanitarian work (beneficiaries and their representatives). We can say that the incident opens new eyes for both organizations and local communities to build a more flexible partnership, in the concept of dealing and handling with a better relationship of protecting humanitarian aid workers from violence and quick response for pre-hospital and ambulance services.

The lessons learned from this incidents can be summarized in the importance of full coordination among humanitarian organizations and local communities to mitigate the risk of like such incidents, the importance of pre-hospital and ambulance facilities in remote areas. The importance of security assessment in deep and analysis aspects, with high consideration for the nature of the armed group and the local culture adaptation, the accessibility of communication between pre-hospital teams and the other concern partners in emergency cases.

The immediate response and communication during the incident were done well to mitigate the armed group risk and sizing the waiting time for the individuals effected by the incidents. On another hand, the refusal of the armed group to facilitate the first medical care for those who injured in the incident scene, added more stress on the environments surrounded the incident site.

It was a great surprise for me when all the local communities responded to the incident in a more effective way than what I expected to mitigate the risk of the armed group and cooperate fully to assist the injured people.
Definitely the incident lead to a new insight and a leap in understanding of the situation, either during or after the incident , based on the incident critical situation and its sequences & how I could recalled my flash back memories to assist me during and after the incident .

All motivations and factors assist a lot in the risk mitigation, the accumulated experience, coordination, proper communication, good use of equipment …ect. As I mentioned before, personal psychological trauma related to the incident was treated successfully for the effected individuals, with extensive care for the side effect and symptoms, which encountered them from the incident.
The organization used the sequences of this incident to improve the measurements of the security and rapid assessement for the field missions. It was put as one of the most important learned lessons.