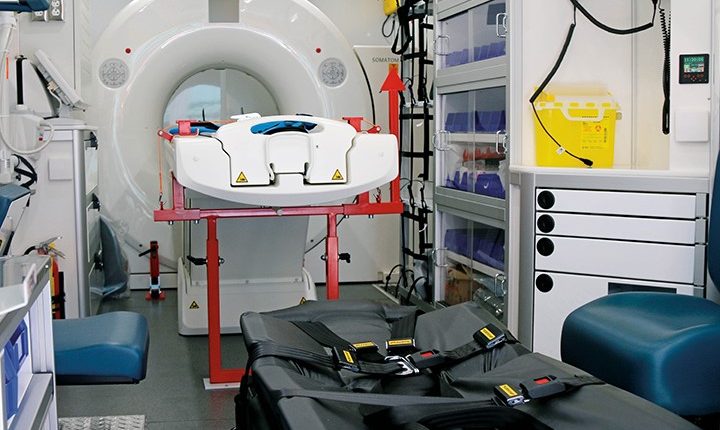 When patients with acute stroke symptoms are treated on a mobile stroke unit (MSU) and receive anti-clot medication faster, they have less disability at 90 days, reported a recent study in the New England Journal of Medicine co-authored by Indiana University School of Medicine researcher, Jason Mackey, MD

MSUs also administered t-PA faster after onset of stroke at an average of 72 minutes compared to 108 minutes in the EMS group.

“Stroke is a highly time-sensitive condition, so the faster we can treat people, the higher the likelihood that they will do well,” Mackey said.

“Treating people faster gives the clot less time to organize and makes it easier to break up.”

He served as principal investigator for the study’s IU site.

MSU are ambulances equipped with a computed tomography (CT) scanner and staffed by one or two paramedics, a CT technologist and a critical care nurse.

A vascular neurologist is available on board or via telemedicine.

“One very important finding in this trial is that with MSUs, we can treat many more people in the first hour after stroke when the likelihood is highest that they will do well,” Mackey explained.

“’Time is brain’ is the mantra in stroke and each minute that goes by without reperfusion is associated with a loss of 2 million neurons.”

The nationwide, multicenter trial was led by researchers at the University of Texas Health Science Center at Houston (UTHealth) where it began in 2014 when the center acquired the first MSU in the country.

The study was later expanded to six additional sites, including IU Health, and enrolled 1,515 patients over a six-year period.

Of the patients enrolled, 1,047 were eligible for t-PA with 617 patients receiving care by an MSU and 430 patients cared for by EMS.

Mackey and his research team joined in the last year of the study and contributed 13 patients to the enrollment population.

IU Health’s MSU is the only one in the state of Indiana, and one of only 20 MSUs in the U.S.

“Showing that these units are effective in helping stroke patients is going to help us build better systems of care for our stroke patients across the country,” he explained.

“Right now, most of these units are funded through philanthropy and we need better reimbursement to ensure sustainability—the positive data will help with (Centers for Medicare and Medicaid Services) and other payers.”

Stroke, A Small CT Scanner On Ambulances And Helicopters To Aid Rapid Diagnosis

Broken heart syndrome is on the rise: we know Takotsubo cardiomyopathy