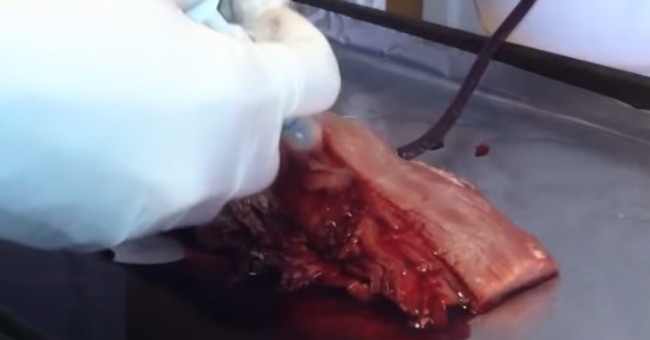 Poly-STAT, the new gel that could stop a wound from bleeding

Wounds from gunshot, knife or traumatic accidents are the most difficult to treat. If the injoured person doesn’t receive immediatly assistance, this kind of injury could be fatal. Usually from the military field came new tecnologies that could help rescuer to stop bleeding in wounded people. But now, the new tool for paramedics and first responder (and soldiers too) is an injectable polymer material that act faster than other materials, and it has been developed by the University of Washington.

Most military battlefield casualties die before ever reaching a surgical hospital. Of those soldiers who might potentially survive, most die from uncontrolled bleeding. In some cases, there’s not much medics can do — a tourniquet won’t stop bleeding from a chest wound, and clotting treatments that require refrigerated or frozen blood products aren’t always available in the field. The new polymer, described in a paper featured on the cover of the March 4 issue of Science Translational Medicine, could become a first line of defense in everything from battlefield injuries to rural car accidents to search and rescue missions deep in the mountains. It has been tested in rats, and researchers say it could reach human trials in five years.

SCIENCE ALERT – The material, known as PolySTAT, was developed by engineers and mimics a natural protein in our body that helps strengthen blood clots. The team says that following injection, their wound healing polymer “circulates innocuously in the blood, identifies sites of vascular injury, and promotes clot formation to stop bleeding”.  So far they have only tested their polymer on rats, but report in the press release that 100 percent of the animals injected survived “a typically-lethal injury to the femoral artery”.  This stacks up fairly well against the 20 percent survival rate among the rats they treated with a natural protein known to induce blood clotting.

The results have been published in the journal Science Translational Medicine and the team says their polymer treatment – which is expected to reach human trials in five years – could provide an important buffer to help people with serious injuries in remote locations reach medical facilities, such as soldiers in conflict zones.

“Most of the patients who die from bleeding die quickly,” said co-author and emergency medicine specialist Nathan White, in the press release.

“This is something you could potentially put in a syringe inside a backpack and give right away to reduce blood loss and keep people alive long enough to make it to medical care,” he said. The polymer is meant to augment the natural protein factor XIII, which encourages special fibres – known as fibrin – in the body to weave together to form a barrier at a wound site.

As Ossola explains for Popular Science, “when you get a cut, your body hurries to stop the leaking to keep the blood in and the nasty bacteria out. Platelets in your blood gather more cells around the wound, creating a mass that is then bound together by a strand-like protein called fibrin.”

With small wounds, this woven barrier usually holds and the cut scabs over. But with larger wounds, clots sometimes can’t form fast enough, or else the pressure of the leaking blood is too great, causing the barrier to give out and the bleeding to continue.  According to the release, PolySTAT adds “‘cross-links’ that reinforce the latticework of that natural bandage”.

“It’s like the difference between twisting two ropes together and weaving a net,” said co-author and bioengineer Suzie Pun in the release. “The cross-linked net is much stronger.”

The team has also shown that the polymer material is more resistant to enzymes that dissolve clots, which means they can stem bleeding for longer periods.

Importantly, the researchers say they “used a highly specific peptide that only binds to fibrin at the wound site. It does not bind to a precursor of fibrin that circulates throughout the body. That means PolySTAT shouldn’t form dangerous clots that can lead to a stroke or embolism.”

There are several technologies aimed at halting blood loss following traumatic wounds. A material called Veti-Gel can be applied to the skin’s surface to essentially seal a wound. Watch the video below, OR DON’T, if you’re AT ALL squeamish about blood.

FAST examination as an important assessment in patient with trauma

Ambu bag, salvation for patients with lack of breathing