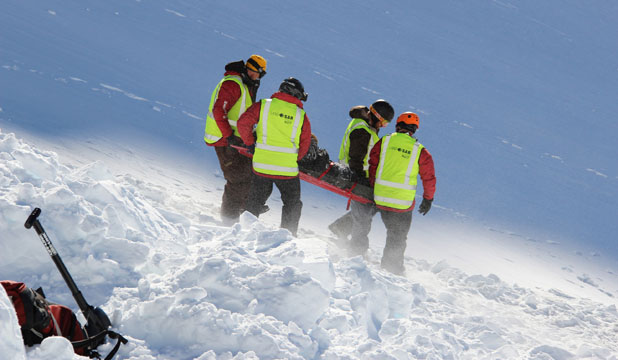 In Kornhall’s talk, he first discusses the cause of an avalanche and current survival rates suggesting that approximately 60% of avalanche victims result in death.

The causes of these deaths rely on 3 studies from Utah, Austria and Canada (Jeff Boyd & Co-authors). The data from these studies propose that approximately 80% of deaths occur from Asphyxiation, 20% from trauma and a very small amount from Hypothermia which is usually an associated problem or complication that needs to be taken into consideration.

Kornhall goes on to discusses the Avalanche Survival Curve and what this means in relation too reducing avalanche deaths. The Curve is based the likelihood of survival plotted against time under the snow and suggests that there are four main phases:

The curve depicts that for the best chance of survival a victims must be reached within a period of 30 minutes, this can increased the chance of survival up to 70-80%. Commonly this rescue is performed by an immediate bystander/s (friends/colleagues) that have witnesses the avalanche. With Organised Rescue being on average 150 minutes the graph indicates that chance of survival is reduced to 10-20% suggesting that this is most commonly a body retrieval exercise rather then a rescue. With these statistics in mind Kornhall touches on the need for anyone travelling outside a prepared ski area to be properly equiped to deal with an avalanche crisis situation carrying equipment such as snow shovels, beacons and probes. Kornhall also briefly discuss the avalanche airbag, a new innovation in avalanche safety and its ability to possibly increasing survival rates by 10-15% but warns that current data on this device is sketchy and needs further testing.

Kornhall then finishes by touching on the porcess of a deployed rescue:
The Find – Prob-line, an Avalanche dog team.
The Excavation – the need for a plan.
The Rescue – there maybe need to clear the airways, incubate, provide oxygen or start compressions in victims in cardiac arrest.