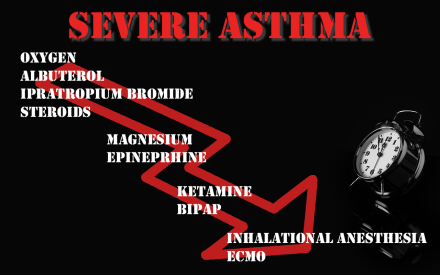 Management of life threatening asthma in the emergency department

A 16 year old female with a history of severe asthma is brought to your community emergency department after a week of respiratory symptoms that have suddenly become much worse. She has been admitted to hospital 4 times this year, including one visit to the ICU. Her respiratory rate is 45 and she is using every accessory muscle she has, but she doesn’t appear to be moving much air. In fact, her lungs are silent to auscultation. She looks tired and the monitor shows her vitals as a heart rate of 140, blood pressure of 99/60, and an oxygen saturation of 88%…

We all know the ABCs of resuscitation, but A doesn’t always come first. Asthma is a respiratory problem not an airway problem. Unless the patient arrives in arrest, there is no reason to intubate immediately. Adding plastic to the airway only makes things worse.

The immediate action is to start oxygen and bronchodilators. In the severely ill asthmatic I don’t spend too much time debating the finer points of evidence based medicine. Give both albuterol (salbutamol for most countries) and ipratropium bromide. Also, stick to nebulizers in these patients.

After oxygen and bronchodilators are started, my nurses start hooking the patient to the monitor and place 2 IVs. (This often occurs simultaneously, as we have a large team in resus. However, if you are working with a smaller staff prioritize the breathing meds over the IV.) Essentially all patients with severe asthma are dehydrated and they are also prone to hypotension when switched to positive pressure ventilation. I start a 20ml/kg bolus of my favorite crystalloid as soon as I have IV access.

The definitive treatment of all asthma patients is corticosteroids. EBM nerds will talk forever about oral and parenteral steroids being equivalent, but these patients are all getting their steroids IV. The biggest question is timing. Steroids will take a minimum of 6 hours to have a noticeable effect. Therefore, they are unlikely to help you in the resus room, but the earlier they are given the earlier then are able to work. In the critically ill asthma patient, there may be other therapies to prioritize over a medication that won’t make an immediate difference. Instead of a nurse being tasked with getting steroids, you might need RSI medications, IV fluids, vasopressors, or help setting up non-invasive ventilation. Focus on the therapies that will help this dying patient immediately first, but get a dose of intravenous steroids on board as soon as you have a free minute. Any corticosteroid should be fine, such as methylprednisolone 125mg IV or hydrocortisone 100mg IV.

The final medication that I will routinely include in the management of life threatening asthma is magnesium. That may be a controversial statement and I certainly don’t use magnesium in asthma patients that aren’t actively dying, but there is a modicum of evidence and it seems like the sicker you are the more likely magnesium is to help you. The dose of magnesium sulfate is 2 grams IV repeated up to 3 times in the first hour.

If the patient is not improving with these first line therapies, I consider two second line medications: epinephrine and ketamine.

Pray you don't need an ambulance in Mpumalanga

Lithotomy position: what it is, when it is used and what advantages it brings to…

AIDS, difference between HIV1 and HIV2