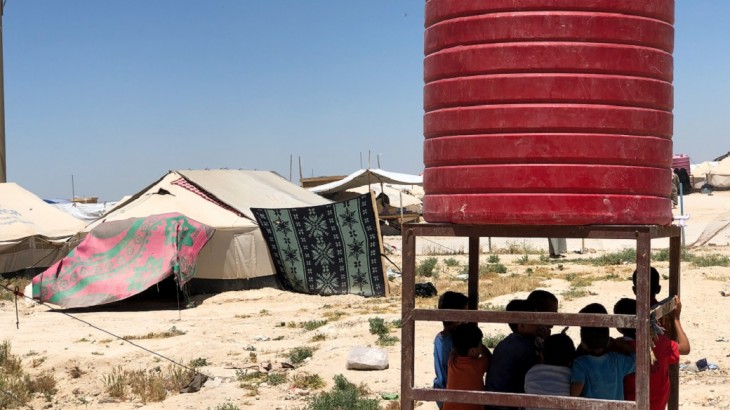 An update from the International Committee of the Red Cross (ICRC) on the situation in the Al Hol camp for displaced people in north-eastern Syria.

Geneva – “The medical needs in Al Hol remain tremendous. Getting a field hospital up and running in an environment as challenging as this one has been a huge test for everyone involved,” said Fabrizio Carboni, the ICRC’s director of the Near and Middle East region. “But we’ve treated more than 2,000 people now and are addressing the medical needs of some of the most vulnerable people in Al Hol.”

“We’re seeing cases of malnutrition and diarrhoea, and patients wounded by weapons are coming in with severe infections because they’ve been unable to get treatment until now. It’s a relief to know that we’re able to do more for them,” he said.

Today, more than 70,000 people are living in the camp; an estimated two-thirds are children. The ICRC, together with its partner the Syrian Arab Red Crescent (SARC), intends to continue increasing its response in the coming months:

The field hospital in Al Hol camp is a joint initiative between the ICRC, the SARC and the Norwegian Red Cross. It opened on 30 May and is now running 24/7. The field hospital includes staff from the SARC and a multinational ICRC team, including doctors, nurses and technicians. It is providing advanced health care and treating some of the most vulnerable displaced people in Al Hol camp.
As of 1 July, the hospital has treated more than 2,000 patients; 45 per cent are children and a third of those are under five years of age. Patients come from every part of the Al Hol camp.
The top three morbidities were respiratory tract infections, diarrhoea and anaemia at 35.6%, 11.8% and 4.2% respectively.

In the initial phase, the hospital is equipped with 30 beds to provide post-surgical care. The field hospital’s facilities include an emergency room, operating theatre, HDU (high dependency unit), X-ray, delivery room and a laboratory.

The community kitchen established by the ICRC and SARC has distributed more than 632,300 meals. It delivers up to around 8,100 meals per day. 500,000 litres of clean water are provided via water trucking on a daily basis in the camp. The ICRC and SARC have installed 328 latrine units in the camp to cover areas where it had expanded. However, access to latrines and washing facilities remains a challenge.

The hospital is providing life-saving surgical assistance to people who are in desperate need of medical attention. An assessment done by the Norwegian Red Cross estimated that around 2,000 weapon-wounded patients are accommodated in Al Hol camp.
The peak of the arrivals appears to have passed during April, but Al Hol camp continues today to sporadically receive a small number of new arrivals. They arrived sick, injured, tired, afraid and worried. There are many wounded and amputees among them.

The ICRC is particularly concerned about children living in the camps without their parents or habitual guardians, as well as other especially vulnerable persons. Since the beginning of 2018, the ICRC team has registered more than 4,384 vulnerable persons in internally displaced people’s camps in the northeast, including more than 3,005 children.

Families stay in their tents, even if it is uncomfortably hot inside, to avoid the sun. Groups of children sit under the stands holding the water tanks just for some shade. The temperatures have not yet reached the scorching summer highs yet, but it’s already 50 degrees Celsius. The muddy ground has turned hard and parched, and the wind blows gusts of dust into everything.
We see many people who are injured, with their wounds bandaged, lying at the entrance of their tents, trying to stay out of the sun. Many children are carrying jerry cans of water to help their families – for some of them, the jerry cans are almost the same size as they are.