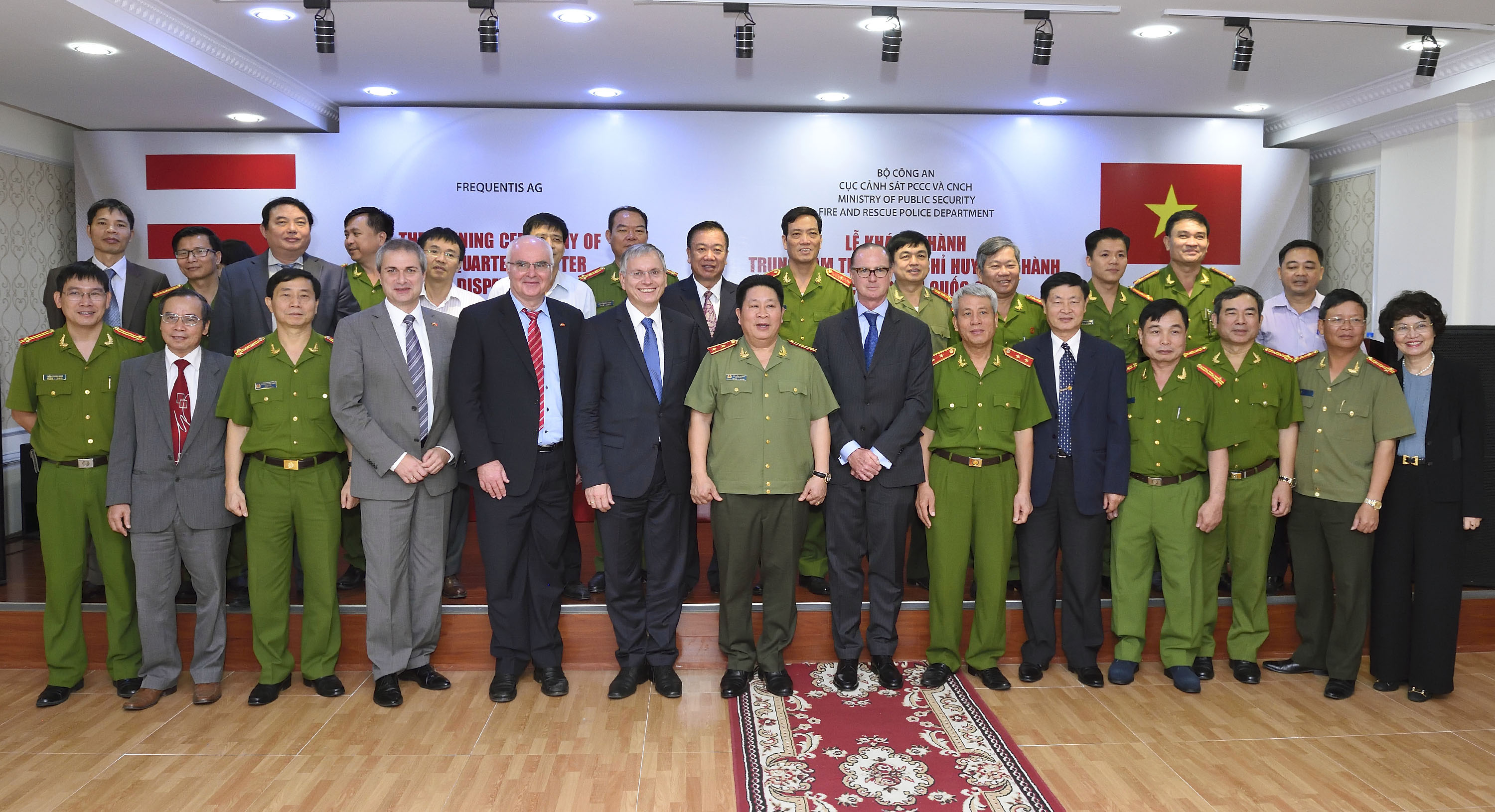 FREQUENTIS system is officially handed over to operatives

With an order value of EUR 8 million, the FDC (Fire Brigades Dispatch Center) project in Vietnam is the biggest fire brigade project the Vienna-based high-tech company has worked on so far. Within the framework of an economic mission in Vietnam, Alois Stöger, Austrian Federal Minister for Transport, Innovation and Technology, took part in the official inauguration of the fire brigade central in Hanoi. The event leads over into the project’s second phase, where further dispatch centres and fire brigade stations in Vietnam will be re-equipped.

The FDC project is part of a long-term modernisation programme currently taking place in Vietnam. Phase 1 comprises the re-equipment of the fire brigade central, the training and maintenance centre in the capital, Hanoi, and of the fire brigade dispatch centres in the four cities of Ho Chi Minh City/Saigon, Da Nang, Hai Phong, and Binh Duong, including the fire brigade stations and mobile equipment. Up until now emergency calls and orders to go into action were communicated through telephone lines and radios; the integrated Frequentis communication system now ensures much shorter reaction times. The system connects the fire brigade’s dispatch centres, stations, and vehicles with each other and optimised the use of resources and the exchange of information with other organisations. The performance of the system was demonstrated within the framework of the inauguration ceremony where not only minister Stöger but also high-ranking officials from politics, economy, and local fire brigade and rescue organisations were present.

Technology minister Stöger was impressed: “With the project ‘Fire Brigades Dispatch Center Vietnam’ Frequentis has elevated the communication of the emergency task forces in Vietnam to a whole new level. It’s amazing to see the contribution Austrian technology can make to the safety here.” The technical solution comprises Frequentis voice and data transmission systems with integrated voice and data recording. Other functions like call recording and computer aided dispatching (CAD) in combination with a geographical information system (GIS) are also integrated.

After the project’s completion an area with more than 13 m inhabitants will profit from the newest Frequentis technology. A total of 4 dispatch centres and 21 fire brigade stations handles about 1,600 calls per day. Additionally, there are 64 fire engines that are connected via mobile communication, too. As a result of the current socio-economic developments the project is received very positively in Vietnam. It is realised based on an Austrian soft loan. Soft loans are intended for projects that contribute to a recipient country’s sustainable development and that are supported by the public authorities. Caption: Minister Alois Stöger inaugurates Fire Brigade Dispatch Center in Vietnam; Copyright: Johannes Zinner

MAF Special Vehicles, ambulances for every EMS service in Europe