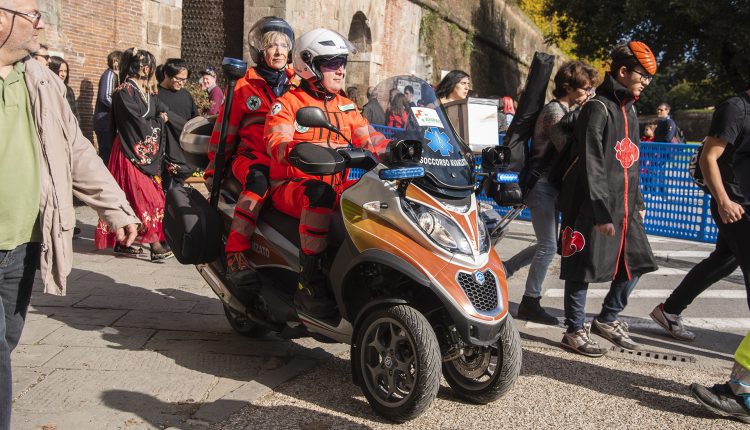 Mass events: the role of motorcycle ambulance to improve the response

What advantages does the motorcycle ambulance offer during mass events like Lucca Comics & Games? Here is the case-report of this intense “trial by fire” that Piaggio Mp3 motorbike succeeded with flying colours!

LUCCA – During the demonstrations with a dense mass of people, efforts become complicated and challenging to carry out promptly. If then the event occupies an entire city centre, with narrow streets, slimy pavement and… thousands of cosplayers disguised as military personnel, killer nurses and vampires, we can safely speak of a real “trial by fire”.

The data and experiences gained during the most important European exhibition of the world of comics are handy for making evaluations. On occasion of Lucca Comics & Games 2019, the town of Lucca hosted around 70,000 and 90,000 people every day who paid the ticket. Besides, also about 20,000 and 30,000 visitors came around each day and crowded the city.

For the pre-hospital medical service and the emergency operators, it means two cities of inhabitants together. From 90,000 to 180,000 people a day means essential change. Multiplied for 5 days of the event also involves a concentrated load of tourists, i.e. around 350,000 “extra” people to take care of.

The heavy rainfall did not stop visitors but increased the possibility of falls and traumas. It is understandable how important is the right dispatch of first responders.

During these 5 days, Lucca has been presided by 15 squads of ANPAS first responders, led by dr. Maria Grazia Lencioni, pre-hospital emergency service of 118 Viareggio led by dr. Andrea Nicolini. 3 Advanced medical stations, one COC, one point of radio communication of Anpas managed by SisMAX group, medics, nurses and hundreds of first responders which permitted to the emergency system to find its balance.

Since many years, this configuration is considered efficient. One hundred volunteer BLSD first responders have been added to control activities and Civil Protection operations. But the main reason for the efficient and on-time service are the equipment of these vehicles.14 ambulances, 4 walking crews and the innovative use of BLSD motorcycle ambulances for rapid response. A very appreciated news by first responders and patients.

Motorcycle ambulance: improvement in quality and in response perception

We talked about the service of Piaggio’s 3-wheeled motorcycle ambulance, with specific first-aid and BLSD equipment, along with Croce Verde of Lucca, which physically managed the fleet.

“This year only the first day was sunny – Marco Malaspina, the coordinator of the association, explained – while the others it was raining all the time. Thanks to motorcycle ambulances, we’ve been allowed to carry out different interventions. With the sun the workload was considerable, “There were more than 80,000 paying tourists in the city. There have been about 50 interventions. On rainy days, we had an average of 15 interventions. In any weather condition, however, the motorcycle ambulance helped us making the difference.”

The Piaggio Mp3 motorcycle ambulance offered many advantages to Lucca’s first responders, both with sun and rain. With a large mass of people clogging up almost all the streets, responders found a very complicated situation to manage, with a few spaces to move.

If the location of the callers and the interventions were carried out with great precision by the dispatch centre, the greatest difficulty for the ambulances was to move in the crowds of cosplayers.

Here, the Piaggio Mp3 played an important role: “The problem was not in the attention of people, who would also have wanted to give way to the ambulance. The problem was just physical: space was even not enough for letting pass a van. That’s why we thought about the motorcycle ambulance as the first-response vehicle. It anticipated the ambulance on interventions with a double advantage”, explains Dr Malaspina.

“First, the first response team arrived on site for a first evaluation and a first treatment. On the other hand: the siren sound permitted the crowds to see the flashing light and let the motorcycle to pass. After this forewarning, the ambulance had no difficulty in passing”.

Few minutes, but the difference between the times of response has been noticed. This particular logic of approach will be evaluated in future.

Motorcycle ambulance on rainy days: the safety of being always stable

Even with the rain during the Lucca Comics & Games, the Piaggio Mp3 motorcycle ambulance has been precious,  thanks to its three wheels.

“We responded to 5 calls under the rain, and we understood that the Mp3 contribution is important both in the crowds and in situations with wet surfaces. Our driving sensations with Mp3 were positive because also on wet cobble there is no danger to fall. Then, when we arrive on target, we can block the differential gear and leave it alone without the kickstand”.

Motorcycle ambulance: a solution for EMS

The motorcycle ambulance would become a useful service in case of events, also developed in long distances. Such as foot races, bike races or other itineraries. There are hundreds of events to preside, where a vehicle that can be activated both with sun and rain could be perfect.

“The Mp3 motorcycle ambulance is a perfect vehicle for events. It allowed us to move more comfortably and quicker in sites where the ambulance could be a severe problem – explains Dr Malaspina. “We also used compact but complete equipment: defibrillator, resuscitation backpack, little trauma kit”, used and managed by two responders of Croce Verde Lucca.

This vehicle arose a great interest, and it has been a characteristic element of Lucca Comics & Games 2019 not only for first responders but also for all the boys and girls who saw it moving fluently in the crowd.

Are you thinking to include Mp3 motorcycle

ambulance in your fleet?

Contact Piaggio now and discover the special prices for you!

COVID-19 in Latin America, the OCHA warns the real victims are children