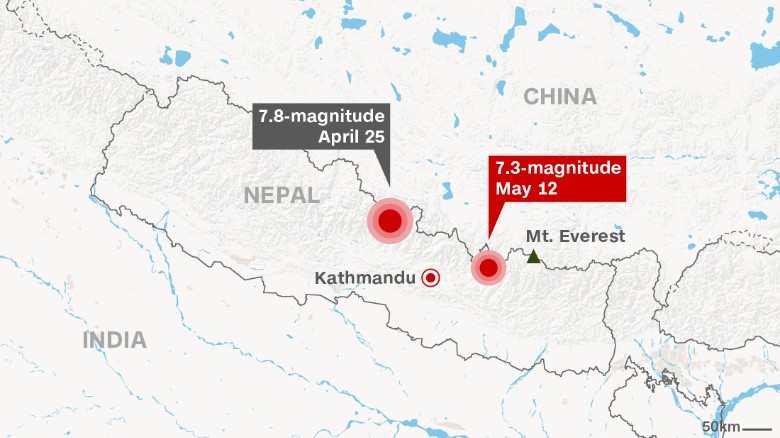 New earthquake in Nepal : Fear is back again

Earth starts shaking again in Nepal.  After the 7.8 quake on April 25, a 7.3 magnitude earthquake hit Nepal on Tuesday.

The epicenter of the new earthquake was about 45 miles (75 kilometers) east of Kathmandu. According to NBC News at least 42 people died, others 1117 injured and panic is now all around the already devastated streets of Kathmandu. Northern India and New Deli (550 miles west from the epicentre) also felt shockwaves.

“It was completely unexpected,” told NBC News Shristi Mainali, 21 year old nursing student. “At first we just felt like a shake, and we thought it was normal, we are having aftershock, but it didn’t stop, so we got up and rushed to our garden. We could see the ground moving, shaking … in that moment you cannot differentiate whether it’s the ground is shaking or it’s your legs shaking.”

There have been further tremors of magnitudes 5.6 and 6.3 just 30 minutes later the biggest one.

According to witnesses Tuesday’s quake doesn’t appear to have caused a lot of damage, even if structures collapsed and some of them might be the one already in disrepair.

It could have been worse. But that doesn’t mean it wasn’t dangerous.

“People were just starting to relax and get back to some sort of normality,” said Mark South, a British Red Cross worker based in Kathmandu. Now also that little relax has gone away and frightened people have come back.

Indian Defense Ministry spokesman Sitanshu Kar tweeted that his country’s troops are involved in helping all injured, killed and otherwise impacted in Nepal, including flying some casualties from the village of Mrigu to Kathmandu by helicopter.