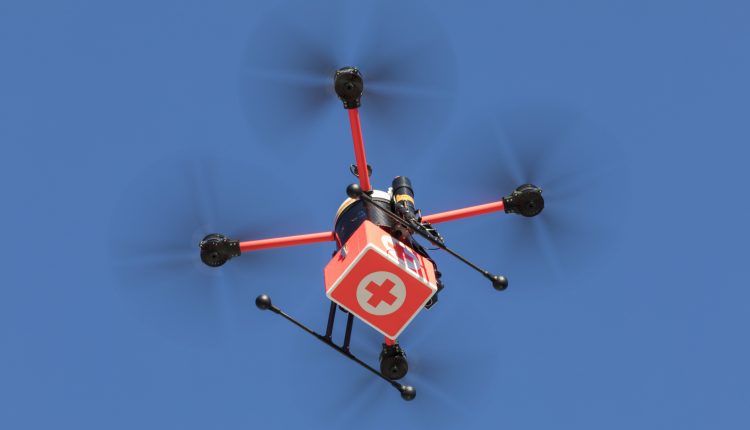 On February 5 of this year, Lufthansa announced the positive results of the demonstration flight tests of the Medfly project for the transport of medical material using drones.

Transport of medicines with drones: a long way

We can agree on this point: drones are like the “Waiting for Godot” of high technology. Their use is usually blocked by inadequate regulations. But this does not mean that the situation cannot develop into something positive.

Transport with drones: the Medfly project

Medifly, from this point of view, is one of the most serious and structured research projects, the result of a joint effort financed by the German Federal Ministry for Transport and Digital Infrastructure in partnership with the Lufthansa Technik group (aeronautical technology services), the ZAL Center for applied aeronautical research in Hamburg, FlyNex (digital solutions for commercial drone operations) and GLVI Society for Aviation Informatics (software components and algorithms for detecting and resolving conflicts in real-time, both manned and unmanned ).

During the demonstration in Hamburg, the drone flew for six times between the German Armed Forces hospital in Wandsbek-Gartenstadt and the Saint Mary’s Hospital in Hohenfelde. It is about five kilometers distance.

The objective of Medifly’s research is to find out how the extent UAV systems can be used to carry out the transport of medical samples in a safe and reliable way with drones. Tissue samples are regularly extracted during surgery.

To ensure that the surgeon has removed all the abnormal tissues, the samples must be examined by a pathologist during the operation. Usually, multiple samples are then removed, individually packed and sent to a pathology laboratory for diagnosis.

Drones and medicines: will we replace ambulances?

Most hospitals do not have a pathology laboratory inside and for this reason, the tissue samples are transported by ambulance to the nearest equipped hospital. The intervention cannot be resumed until the results are received, often after long periods of anaesthesia.

Replacing the ambulance with a drone could significantly shorten the transport process and therefore the periods of anesthesia, as the pathology laboratory can be reached by air, regardless of ground traffic. In addition, drones could also connect remote hospitals that are sometimes so far from any pathology laboratory that they have to send their tissue samples after surgery. Depending on the diagnosis, this carries the risk of a second surgery.

Since drone flights took place not only in a densely populated urban area, but also in the air traffic control area of ​​Hamburg’s international airport, a large number of security measures had to be implemented. First, it was necessary to demonstrate that automated flights in this complex environment and above highly frequented traffic routes can be carried out safely and reliably at any time. Therefore, all parties involved had to invest several months of discussions and thorough planning to obtain the necessary flight approvals from the competent authorities.

Here is what Lufthansa reported:

“As the drone flights not only conducted in a densely populated urban area, but also in the air traffic control zone of Hamburg’s international airport, a large number of safety measures had to be implemented. First, evidence had to be provided that automated flights in this complex environment and above highly-frequented traffic routes can be performed safely and reliably at any time. Thus, all parties involved had to invest several months of discussions and thorough planning to obtain the required flight approvals from the responsible authorities. The project partners thank Hamburg’s civil aviation authority and the air traffic control office (DFS) at Hamburg airport in particular for the very constructive exchange during the planning phase.

Several reknowned institutions have joined forces for the Medifly project: ZAL Center of Applied Aeronautical Research, FlyNex, GLVI Gesellschaft für Luftverkehrsinformatik and Lufthansa Technik AG. Hamburg’s Authority for Economics, Transport and Innovation, as well as both hospitals involved, have joined Medifly as associate partners. Based on the insight gained from today’s successful test flights, the partners intend to start an extended test flight campaign soon. This is expected to last several months in order to assess additional factors for an economically-viable utilization of the UAS technology.

“Due to their manifold fields of application, unmanned aircraft systems have significantly gained importance – on a commercial level as well as in private. Unmanned air systems technology thus provides numerous interesting growth potentials for the German economy,” said Michael Westhagemann, Hamburg’s Senator for Economics, Transport and Innovation. “In this project, the specific benefit for both users and the community is clearly visible. Automated aerial vehicles will contribute significantly to the improvement of health care.”

“Today’s successful test flights are an important step towards the future use of drone systems – right in the middle of the city of Hamburg,” stated Boris Wechsler, Project Manager for Medifly at ZAL. “We know where to start and what we need to do in the future. And we can already say: further drone projects will follow.”

“Medifly is not a classic aviation topic,” said Christian Caballero, Chief Operating Officer at FlyNex GmbH. “The mass of influencing factors for a successful flight planning results from the ground infrastructure. With our solutions, we can also set the course for automated flights out of sight for this project and show how medical drones can support health care.”

“In order to establish a sustainable and future-oriented air transport service, it is important to acknowledge that we are not alone in this air space,” said Sabrina John, project leader at GLVI. “In a metropolis like Hamburg, you permanently have to watch out for police and rescue helicopters. We are happy that we could contribute our years-long experience with air traffic control and air traffic management and bring all involved parties together.”

“Stable and, most importantly, safe drone flights rely on a sophisticated concept of operations,” said Olaf Ronsdorf, project leader at Lufthansa Technik. “Thus, we are not only proud of having contributed our enormous experience from the field of manned and commercial aviation, but we also look forward to exploring new possibilities for future unmanned air transport solutions.”

“Drone-based tissue transports open up numerous new possibilities for us,” said Dr. Tariq Nazar, ENT specialist at the Hospital of the German Armed Forces in Hamburg. “The ambulances we use for this task today are prone to Hamburg’s sometimes challenging traffic conditions and hence sometimes suffer from unnecessary delays. Due to the fact that we require the pathologic results while the surgery is still ongoing, we appreciate the chance to significantly shorten the periods of anesthesia for our patients.”

“We are happy to partner in such a future-oriented project,” said Ursula Störrle-Weiß, Managing Director of the MVZ medical center at Saint Mary’s hospital, responsible for the Institute of Pathology. “The benefit of drone-based transportation of medical tissue is significant, especially in regard to the so-called ‘frozen sections’ extracted during tumor operations, which need to be examined immediately. The sooner our pathology lab receives the samples, the faster we can provide the test results. Usually, it takes no longer than 20 minutes before we can make a diagnosis, for example, to determine whether a tumor is benignant or malignant or if the lymphatic glands are also affected. Achieving the shortest possible waiting times for our precise and safe diagnostics is, therefore, a win-win situation for both surgeons and patients.”

In 2018, Hamburg was one of the first cities to join the Urban Air Mobility (UAM) Initiative of the European Innovation Partnership for Smart Cities (EIP-SCC) funded by the European Commission. Hamburg is, therefore, an official model region for the exploration of civil use cases and application fields for drones and other urban air transport technologies.”

Rescue training, Neuroleptic Malignant Syndrome: what it is and how to deal with it