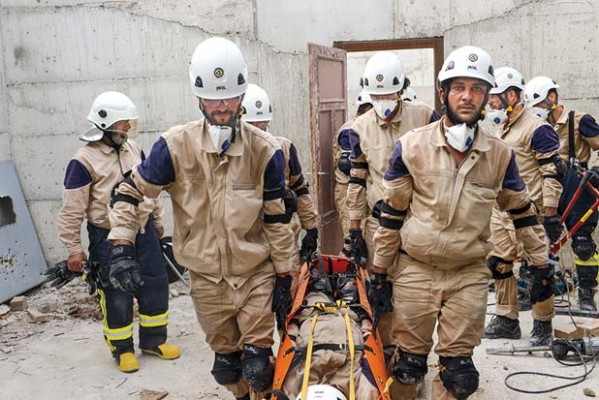 Is there something more dangerous than saving live on a battle field? No, and Bryan Schatz describe the life that the White Helmets, a group of ill-equipped civilian volunteers, experience every day. On the Men’s Journal Schatz describe the training that the Syria’s Elite Rescue Force do everyday, to help saving syrians on the front line.

Sweating in the 104-degree heat in Adana, Turkey, former British infantry officer James Le Mesurier is training a group of average Syrians to become members of the U.S.-funded Syria Civil Defense (SCD) team, an elite crew of battle-ready first responders. It’s September, and amid the confusion of President Bashar al-Assad’s bombing campaigns against rebel factions and the U.S. airstrikes against ISIS, the 25-man SCD teams are working to save civilian lives. Le Mesurier’s job is to get them ready — by re-creating an urban war zone at the SCD training center near the Syrian border. “We sourced all the materials to be exactly like what you’d find in Aleppo,” he says, an unlit cigarette hanging from his lips as he stands beside the course’s broken concrete and twisted metal. “If you’re not killed in the blast, you can get trapped and then die from dehydration, bleeding out, or organ failure within 72 hours.” Le Mesurier, 43, lights up: “Syria. It’s the Mount Everest of war zones — an absolute nightmare.”

To help save Syrians on the front line, the U.S. has funded $13 million so far in humanitarian aid to civil defense teams like the SCD. “It’s one of the most important things we can do to increase the effectiveness and legitimacy of civil authorities in liberated areas of Syria,” says Mark Ward, a senior State Department official leading the U.S. government’s Syria assistance team. “It enables Syrian civilians to do something tangible in the face of the regime’s atrocities. There’s nothing that brings a community together more than efforts to rescue people.”

While the sun creeps overhead, Le Mesurier’s trainees begin their day’s mission: to break into the concrete and save a child. As the founder of the nonprofit Mayday Rescue, Le Mesurier hosts groups of Syrian civil defenders — former bakers, tailors, students, and ice cream vendors; “regular dudes,” he calls them — at the training center, where they learn how to tunnel into collapsed buildings, put out fires, splint broken femurs, treat bullet holes, and tourniquet missing limbs.

READ MORE ON THE MEN’S JOURNAL