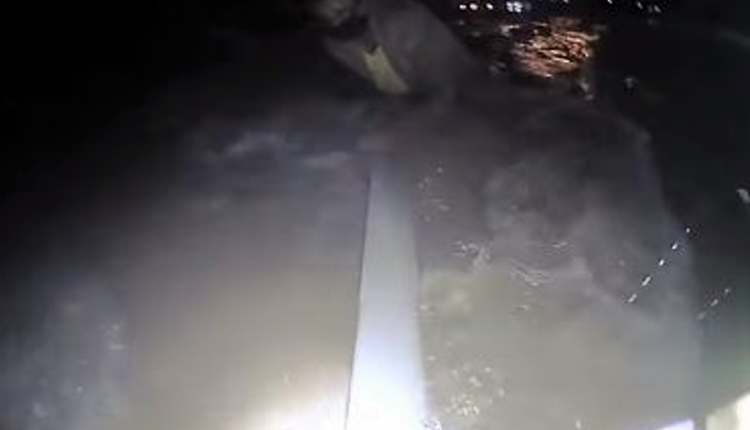 Body cam are now used by many different bodies and for many different reasons: for personal safety, for legal protection, for remote assistance and for communication with operational centres, for example

At the same time, they also become narratives of what is happening, and sometimes of real acts of heroism.

This is shown by the body cam of a brave police officer from Ewing (New Jersey), Justin Quinlan

A woman was at the mercy of the raging waters, clinging to a guardrail.

The police officer reached the woman, who was exhausted.

He waded into the waters and used the guardrail as a guide to get to her.

“Hold on dear, don’t move, OK?” he yelled as he approached the woman. She appears exhausted.

“When I turned down the street, there was no water,” she tells Quinlan moments later. “Yea, it’s coming up out of nowhere,” Quinlan responded.

The Ewing Police Department publicized a two-minute clip of the rescue Wednesday, a week after it occurred, to illustrate what fire responders were dealing with during the height of the deadly storms from Hurricane Ida that killed 27 people across New Jersey – many who drowned.

Quinlan held onto the woman for about 20 minutes as they both sat on the guardrail, awaiting fire boats from the Ewing Fire Department, police spokesman Lt. Glenn Tettemer said.

In the video, Quinlan explains that they are going to stay put because he is unsure what is in the water, and debris could injure them.

The woman says she was under advice that if she could get out of her car she should walk to safety.

Tettemer lauded Quinlan’s actions and decisions, as well as the Ewing Fire Department, for teaming up to make a positive outcome.

Ewing Fire Capt. Kyle Brower and Firefighter Oscar Estrada entered the water and took Quinlan and the woman to safety, he said.

The department thanked officers, “who worked tirelessly during this storm, in soaking wet uniforms and boots, who possibly saved several lives that night while putting their own at risk.”

Fibromyalgia: the importance of a diagnosis