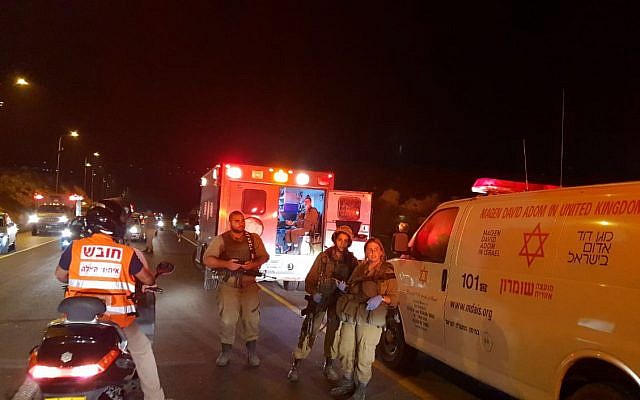 Paramedics really are always in danger when they are out with the ambulance. Violence episodes are common and unfortunately, frequent. The setting of this case study is in Israel.

The characters of this real experience are paramedics and EMTs in Israel. The protagonist has been in EMT-P training for the past year. For the last years, Jerusalem and Israel have been seeing a serious uptick in Terror attacks by “lone wolves” taking all kinds of shapes: stabbings, car-rammings, shootings, bombings and any mix of the previous.

The easy choice for this case study would be to start recalling a story about responding to some terror attack where there may or may not still have been an active shooter setting or the terrorist fled and may or may not be fleeing in the direction they are responding from.

During this staging period, as paramedics, we are often sitting ducks. Several years ago we were responding to a call during the late evening hours and waiting at the entrance to the neighbourhood, as we are looking around to see if someone is approaching us to show us the way we noticed someone running in our direction. The first assumption is of course that this is a family member, luckily for us, one of the crew had sharp enough eyes to notice that this person was carrying a molotov cocktail and he screamed at the driver to start driving. The molotov cocktail got thrown, hit our ambulance but luckily for us didn’t shatter allowing us to escape unharmed. In this case, we weren’t waiting for police escort the only family to show us the way because the situation was supposedly safe.

Sometimes, paramedics who wait for the police can cause a severe delay in response. Not so long ago I responded directly to one of my neighbours (without a police escort, the wisdom of this is questionable), the ALS ambulance was a 5-minute walk away but was still waiting for a police escort. Luckily for me, the paramedic realizing that it might take a while sent the family member back home with a transport chair. After finishing my primary assesment everything was pointing in the direction of a CVA for which as we all know the time to hospital is a critical factor. Together with the patients’ male family members we loaded her onto the chair and started the walk to the ambulance.

Upon arrival at the ambulance, the patient started seizing, had this happened while I was alone in the house I would have neither had the means to stop the seizure nor to protect myself from angry family asking me to “do something”. There is a nice ending to this story though, several weeks after the event one of the family members came up to me in the street to thank me and told me the patient returned home with no lasting negative effects thanks to the quick response of our paramedics.

While waiting for the police the family/friends of the patient can, understandably, get very agitated, they will try to convince us everything is safe and please lets’ go already. This is of course very difficult for most crew members, on the one hand, we want to go and do our jobs to save lives, on the other hand, many of us have experienced first hand why we need a police escort.

Once we arrive on the scene the police sometimes come inside with us, sometimes they stay outside, they may even disappear mid-call (though this is of course not supposed to happen):
A little over a year ago I responded with several other members of our team and an external ambulance crew to infighting in a local clan, while clan members were already waiting for us to take us to the scene (which was inside a building less than 50m from us) the police escort had yet to show.

The call was very close to a police station so we just ended up half-forcing two police officers to escort us inside. Things had calmed down a bit, we had 2 patients, two of the clan elders from opposing factions, so we split up into 2 groups of paramedics and providers. The police officers stayed in the corridor between the two treatment location, both groups of paramedics had one armed provider amongst their number (since we live in dangerous locations quite a few of us have a gun permit). While we were still inside things started to heat back up, we noticed that the police officers were no longer in the corridor or anywhere else in our line of sight.

At first it was kind of ‘short flares’ of violence and the group I was in decided to start taking our patient outside immediately after a short flare-up, the other group lacked a means of transport since we came equipped for a single patient so we would get them another chair once we had our patient outside. As we got outside the clan around us started to fight again in earnest while the other group was still stuck inside. Luckily the close proximity to the police station allowed for a fairly rapid response by border police to extricate the rest of our team.

The armed team member inside confessed that he got very close to being forced to draw his sidearm.
Sometimes due to the explosiveness of the situation, we may just do a very quick primary assessment and load-and-go to do a proper assessment and treatment during transport even though this makes our work harder and may cause us to have less convenient positions to perform our jobs.

A few years ago we had a OHCA call in the street of a clan elder in the street, with the whole clan (tens to 100 people) around us (about 6-8 medical personal and maybe 6 border police officers) the patient was not pronounced in the field, even though he was not viable, but rather taken with “show” CPR to the ambulance (no-one can do effective CPR on a moving stretcher and we didn’t have a CPR device back then) to be transported to the hospital to be pronounced, where security would be able to handle the clan.

Under normal circumstances the only unviable patients we transport to the hospital are pediatric since the proper social worker/psychiatric infrastructure is available there to help the parents deal with their grief, but for such cases where there is a risk to the crew or the general public safety, we will also transport the patient.
During the past year we have on several occasions treated terrorists who had not yet been checked by sappers, this was a mistake on our part (and the police for allowing it) that placed us in grave danger, thankfully we came out unscathed.

I have presented to you various scenarios and situations, I can’t pretend to have a solution.
I do think there are several factors that paramedics/the police can influence to reduce risks:

There are also positive things to say, though I told many stories of violence here the vast majority of our calls end without any violence.