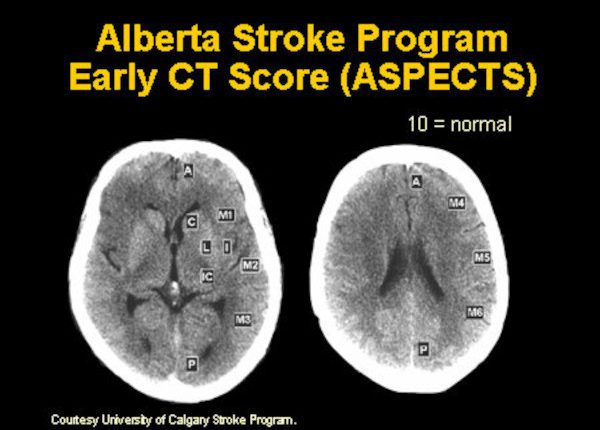 The neuroradiological expertise of the MSU is improved by its ability to detect early ischemic damage via automatic electronic (e) evaluation of CT scans using a novel software program that calculates the electronic Alberta Stroke Program Early CT Score (e-ASPECTS).

The feasibility of integrating e-ASPECTS into an ambulance was examined, and the clinical integration and utility of the software in 15 consecutive cases evaluated.

Implementation of e-ASPECTS onto the MSU and into the prehospital stroke management was feasible. The values of e-ASPECTS matched with the results of conventional neuroradiologic analysis by the MSU team. The potential benefits of e-ASPECTS were illustrated in three cases.

In case 2, in which stroke was caused by large-vessel occlusion, the high e-ASPECTS value supported the decision to initiate intra-arterial treatment and triage the patient to a comprehensive stroke centre.

Stroke Evaluation in a MSU: conclusions

This study on the integration of e-ASPECTS into the prehospital stroke management via a MSU showed for the first time that such integration is feasible, and aids both decision regarding the treatment option and the triage regarding the most appropriate target hospital.

When You Dial 911 and Wall Street Answers