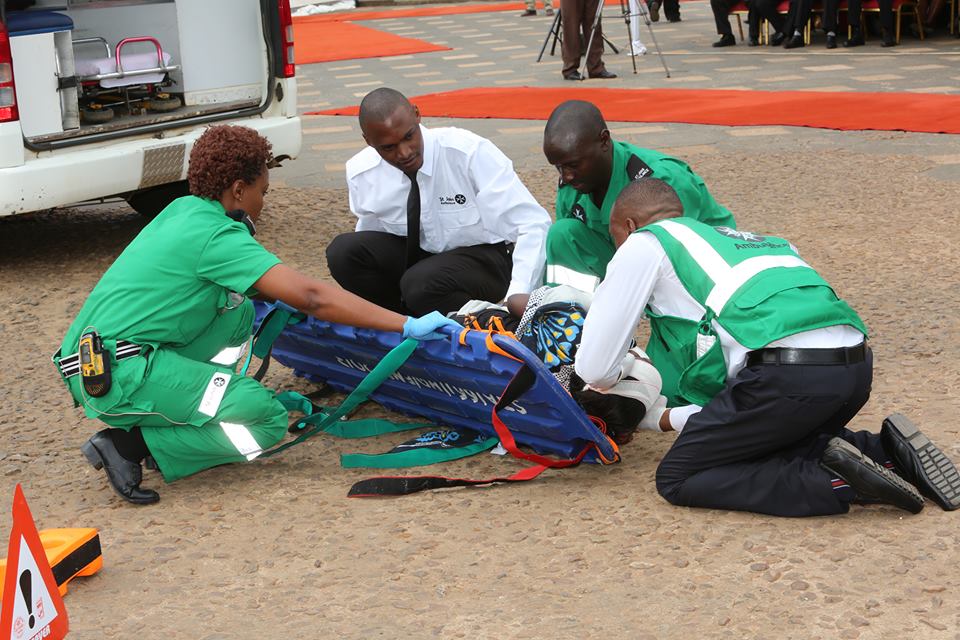 Almost all of you already have treated injured ones involved in a road accident. And some of you may have faced some angry bystander. But how about bystanders who want to decide which patient must be treated or not?

This is the scenario that an emergency medical technician in Kenya had to face during a common dispatch for a road accident in Nairobi. Generally, when the crowd is agitated or violent the police are usually present to handle such situations, but the incident below the police was not present to mitigate. The reason is also that the situation was really quite in the first moment. The crowd started discussing after our arrival.

Another issue is that the dispatched team have never received any formal training on how to mitigate any security issues as they arise. Here is what happened.

“The incident that I choose is one that most of us have faced at some point and can relate to it in regards to having to make a decision between a patient’s life and your own security.

On the 10th August 2016, at around 1400hrs I received a call from the dispatcher on duty that there was a road accident that had happened along Popo road just opposite the Kenya Bureau of standards in south c, Nairobi. The accident was involving a Public service vehicle and a motorcycle, there were two suspected injured casualties. I and my team member responded to the said call and upon arrival, we parked at a distance of about 50 meters.

Immediately after parking some of the bystanders at the scene approached us and started informing us the number of people injured and were trying to show us where the casualties were located. We proceeded to the location and noted the casualties were two. Immediately I triaged and did the colour coding. The first casualty had a deep cut on the forehead and thus I colour coded him red while the other casualty had minor bruises on the leg and could wait as we attended to the first one, so I colour coded him green. Immediately I instructed my colleague to apply pressure with a sterile gauze to control bleeding while I assessed the airway of the unconscious patient.

At this point, the crowd who assisted the road accident was becoming rowdy and angry claiming that the first casualty should be checked first since he was the one riding the motorcycle and the second casualty who was driving the PSV was actually the one who had knocked him down and he did not deserve treatment. I tried to explain to the crowd (passively) that my job is to save lives and not pass judgment on who is right or wrong but they would not listen.

The driver was significantly losing blood but the crowd would not let me continue with treatment as some of them were actually threatening me with bodily harm if I continued my patient care. My team member and I communicated in the nato phonetic language (mainly used in radio communication) and agreed that the best thing was to immediately load the driver in the ambulance and proceed to the hospital. I spoke with the crowd to give us the way to access the ambulance so that we could be in a better position to assist both casualties, telling them that the oxygen and equipment are in the ambulance and they agreed.

We first moved the driver of the PSV van to the ambulance since he was the most injured and was exhibiting signs and symptoms of shock. Out of nowhere the crowd who witnessed the road accident, become agitated and started shouting and hurling insults to an extent of wanting to pull out the casualty from the ambulance and beat him up, thus we were left with no option but to speed off with our patient to the hospital. As they wanted the other casualty with minor bruises to be attended to first.

During this whole incident, my colleague and I remained calm outside despite being scared to death on the inside and we continued negotiating with the crowd and make them understand why we were making that informed decision.”

Ideally, the second casualty in the road accident was not to be left behind but we were left with no choice and had to think of our safety first and of the first casualty. This was quite an unusual decision that we made because normally when we arrive at a scene, the first thing we do is a scene size up and then communicate to dispatch if we require a backup ambulance. While waiting for backup the initial triaging and patient assessment is done and when the backup ambulance arrives the most critical patient is evacuated by that ambulance, while the first ambulance on the scene remains behind with the other casualties.

In this scenario, we did not get the chance to communicate to dispatch in regards to a backup ambulance, due to the angry crowd and so we did not follow the sequence in the right order. In fact, we took so long to offer the initial care to the casualties since we were only two and the angry mob was on our neck and so as we continued performing the initial care we were also negotiating with the crowd, thus limiting the proper interventions to the casualty. Due to lack of multi-agency coordination such as the police who in this scenario would have enhanced crowd control, we felt unsafe and scared and thus were not able to deliver to our maximum capacity.

The dispatcher should have gathered more information from the reporting party to get an understanding on what is happening on the ground so that he/she should have been able to make an informed decision on whether to involve other agencies such as the police.

When we reached the hospital about 10 minutes later and had informed the dispatcher on what had happened and the dispatcher called the police and sent another ambulance to check on the second patient whom we had left behind. The ambulance team ensured that the police were on scene and they took a look at the patient again but since he was okay they did not transport him to hospital and they returned to base.

In summary, the response was at disarray due to the rowdy crowd. Safety measures were not in place. Care to the casualties would have been delivered in order if there was systematic crowd control, this would have worked well with the assistance of the uniformed police. All the same, noting that we were only two of us at the scene and we had no formal training on risk mitigation, we did quite well trying to manage the crowd.
This incident changed my perspective on educating the public on emergencies, hence whenever I respond to such calls I try to explain to the crowd the procedures in place and engage them to assist as I realized that when you let the crowd assist you with the smallest tasks at the scene they tend to calm down.”

Violent and suspicious grief reaction during an emergency survey

India, a prisoner dies beacuse the ambulance refused to reach for him in the…

Malteser International is back, after COVID-19 lockdown, the heart-wish ambulance can…

Emergency care in Thailand, the new smart ambulance will use 5G to enhance diagnosis…