On 23 June, the young Wild Boars soccer team members and their coach entered the Tham Luang cave and remained stranded inside that tunnels because of rainwaters. Let us remember one of the best rescue operations of the last years!

We wish to remember the rescuers who spent their forces to rescue children trapped in Tham Luang Cave for days. Also, losing comrades and hope.

The Rescue at Tham Luang Cave: how did the accident happen?

On Saturday 23 June 2018, a group of twelve boys aged between 11 and 16 from a local junior soccer team and their 25-year-old assistant coach (Ekkaphon Chanthawong) went missing after setting out to explore the cave. According to early news reports, they planned to have a birthday party in the cave after the soccer training. After sudden and continuous rainfall, that filled some chambers of the cave, the team turned out to be stranded in the tunnels by after they had entered the cave.

The alert and the research

Nopparat dialled assistant coach Chanthawong, followed by a number of the boys in quick succession. Eventually, he reached a 13-year-old member of the team who mentioned he was picked up after practice, and that the rest of the boys had gone exploring in the Tham Luang caves.

The coach raced up to the caves finding abandoned bicycles and bags near the entrance, with water seeping out of the muddy pathway. He alerted the authorities.

After days of research, on 2nd July 2018, the Thai Navy SEAL found the missing group in a chamber of the cave, and they thankfully did not present critical conditions.

Tham Luang Cave: Preparation and Equipment for the Rescue

A logistics camp was established at the cave entrance, which accommodated hundreds of volunteers and journalists in addition to the rescuers. The site was divided into several zones: restricted areas for the Thai Navy SEALs, other military personnel, and civilian rescuers, an area for the relatives to give them privacy, and areas for the press and for the general public.

An estimated 10,000 people contributed to the rescue operations, including more than 100 divers, representatives from about 100 government agencies, 900 police officers, 2,000 soldiers and numerous volunteers. As for the ambulance and rescue equipment at disposal, there were ten police helicopters, seven police ambulances, and more than 700 diving cylinders, of which more than 500 were in the cave at any time while another 200 were in the queue to be refilled.

Ambulances determined an essential feature in the rescue operations flow. Indeed, not only the young boys and their coach but also militaries and rescuers in crisis have been suddenly transported to the near facilities. On the tiny and efficient Thai ambulances, the main equipment comes from Italy.

All the Thai ambulances are equipped with devices made by Spencer, the Italian company specialized in emergency and medical devices manufactured for evacuation, oxygenation, and immobilization of patients.

The Thailand Navy Official page advised about the resumption of the operation to save the Thai soccer players and their coach. There will be no news until 4 hours, the time that navy seals need to reach the Tham Luang Cave and pass over the “Chokepoint”, the critical 38-centimetre hole in the rock that boys have squeeze through more than 17 days ago.

Rescue operation restarted on 8 July 2018 in the cave complex Tham Luang Nang Non. The Thai Navy Seals operated in partnership with other 35 specialized subs from Australia, U.S. and U.K. with a plan that was defied by their own “too risky”. One sub lost his life in the initial tentative of reaching the group. Today the same group of soldiers will try to evacuate from the cave the last eight children and the coach.

The youngest and worst-conditions boys, aged between 11 and 16, faced a dangerous and frightening journey out of the flooded Tham Luang cave system on Sunday. But all of them escaped from the cave in good conditions. The boys were found huddled on a narrow bank a few feet above the water, after the most difficult passage in the cave, the “choke point”: it is a 200m dive during the three-kilometre route, where the boys had to squeeze through a narrow, 38-centimetre hole in the rock.

Actually, 19 Australian professionals are involved in the Thailand cave rescue operations, including a doctor specialized in spelunking and “subterranean medicine“, which is a specific rescue protocol for saving and taking care about people who remain injured during a cave exploration.

Canyoning and cave activity took place in a very hostile environment. Any doctor who undertakes a rescue operation requires very good physical fitness, good knowledge of speleology and caving, especially rope techniques and the ability to work in difficult conditions, and under the water.

Doctors – that usually have to know ACLS techniques – may have to spend a long time swimming and roping for reaching the patients. One of the most common problem in this situation is managing hypothermia, due to cold conditions.

More than a billion litres of water (the equivalent of 400 Olympic-size swimming pools) were removed.

Speleo Trauma Care is a specific training course based on the international guidelines but developed specifically for the first-responder and rescuers who need rules for operating in cave rescue situations.

PHTC and BTLS are the main guidelines that any operators have to know. Following a safety check and a first assessment to the patient, the next step in the evacuation procedure regards helping the injured on the returning way. There is common research especially published by the Wilderness & Environmental Medicine about the epidemiology of caving injuries.

There are no collective data analyzing injury mechanism or type in austere environments. Only in the U.S – between 1980 and 2008 – there were 877 incidents reported. The knowledge of the rescuers is really important in this kind of operations. 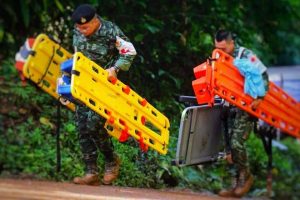 This is the reason why many technicians usually perform rescue exercise. For example, in Europe, there is a European Cave Rescue Association that promotes the exchange of knowledge and experience in the field of cave rescue. The ECRA Cave Rescue Diving Commission is an organized group of cave rescue divers, which participate in joint exercises throughout the European caves, as well as conducting joint dives and expeditions in private time. The group consists of about 80 cave divers from several European countries. ECRA has at least 40 cave rescue divers, including doctors, who are currently available and ready for similar interventions.

“Everybody hopes that the conditions in Tham Luang Nang Cave will allow the rescue as soon as possible” ECRA wrote on its blog.

To better understand what kind of feeling you could touch diving on a cave, with difficult visibility conditions and confined spaces, you can read this contribution from the TDISDI website, realized by Jeff Bozanic, technical diving instructor and research scientist.

I hang, suspended, weightless. Moving my feet slowly, I glide through crystalline waters. Deeper, ever deeper I sink, slowly floating towards the floor. Finally, I stop. Hovering motionless above the floor, I examine the flakes of rust red rock that are strewn across the bottom like a dump truck load of petrified cornflakes emptied many millennia ago. As I hang examining the rocky floor, I ponder the realism and surrealism of conducting research underwater in caves. CONTINUE…

Tham Luang Cave rescue: we remember the one who sacrificed himself to save lives

Saman Kunan, a 37-year-old former Thai Navy SEAL, made a dive from Chamber 3 to the T Junction close to Pattaya Beach to deliver three air tanks, on 5th July. During his return, he lost consciousness underwater. His comrade tried to resuscitate him, effortless. Then he had been brought to Chamber 3 where they attempted another CPR, but unfortunately, he was declared dead.

A memorial statue of him has been realized and located in the site of Tham Luang in order to remember his courage and the sake of his sacrifice.

The equipment that saved children trapped in Tham Luang Cave