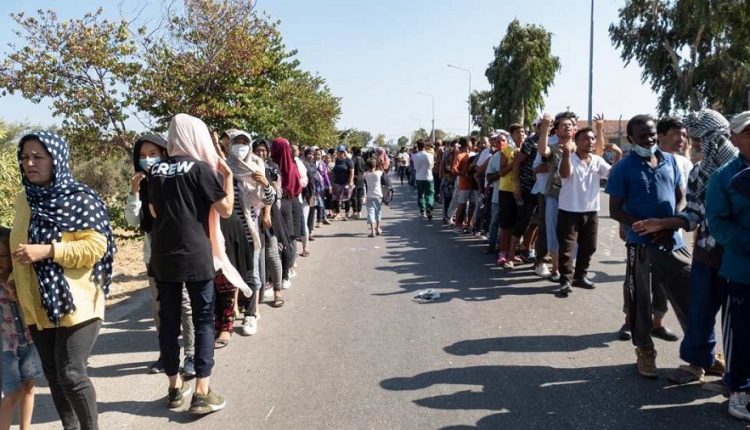 The fire in the refugee camp in Lesbos was a disaster also because of too men, women, children, elderly and sick people forced on the asphalt, under the sun all day long, without tents or blankets at night and without chemical baths or access to drinking water.

Thousands of people for a week now continue to live in camps along the three kilometers of road that separate the old camp of Moria from Mitilene. It is a disaster: men, women, children, elderly and sick people forced on the asphalt, under the sun all day long, without tents or blankets at night and without chemical baths or access to drinking water. Speaking from the island of the Aegean with the agency Dire is Clotilde Scolamiero, operator for the NGO Intersos, in Lesbos to provide assistance after the fire destroyed the refugee camp in Moria.

The fire at the Refugee camp in Lesbos: the biggest refugee camp of Europe destroyed

As reported in the Hellenic press, after the fires that a week ago destroyed the largest tent city in Europe, forcing the 12,500 residents to flee, the local authorities are working to create a new camp: in Kara Tepe they aim to make room for 5,000 people. The work is proceeding quickly and soon it could reach 7,000 tents and from Athens they say that the asylum application procedure will proceed provided that the transfer to Kara Tepe is accepted. But journalists in the field also report that people are refusing to enter.

“They are afraid to remain ‘locked up’ as happened in Moria, because because of the lockdown for weeks no one could enter or leave freely” confirms the Intersos operator on the refugee camp of Lesbos, who continues: “The people we spoke to tell us that they are afraid for their safety. If a new fire broke out this time they could die. They also fear that the limbo they are forced into in Lesbos will continue. They want to be transferred to other European countries or to the mainland, to Greece. Being asylum seekers or refugees is not a crime: it is incomprehensible to keep them stuck here with no prospects”. But along the provincial road that connects Moria to Mitilene, the situation remains complex.

“The police have imposed blockades at the access points, nobody goes in or out” says Scolamiero, observing that from a hygienic-sanitary point of view, in the middle of a pandemic, “it is a disaster”. The operator denounces: “Imagine people piled up who have been unable to access toilets and showers for days. The police, fearing the risk of contagion, prevents access even to us operators”. The volunteers and the army sent from Athens distribute food and water, but “coordinating is complex. From tomorrow we too will start distributing food and hygiene kits, but to do it in these conditions without creating unrest is an undertaking. And then everything will be done on foot. The machines stay outside”.

These days at the refugee camp in Lesbos, those who want to find food or medicine independently “must rely on young people who, crossing the countryside, reach the city” says Scolamiero. “Many tell us, however, that it is risky: the police do not have kind ways with those who violate the blockade”. Intersos has finally identified the risk of sexual abuse and violence since people are forced to stay overnight on the street. “In these conditions there is also growing concern about psychiatric patients” adds Scolamiero. “Not to mention the suffering to which the over-60s and children are forced”.

Myanmar won the battle against trachoma: the WHO congratulates for this result